Our son completed one year and we had a birthday party to celebrate his first birthday. I was more excited about his birthday party as this was the first party in my life that I was organizing all by myself. I had started planning his birthday even before he was born. I know it sounds silly, but I was checking some pins on pinterest about some amazing birthday parties that people had and I wanted to have a similar one for the junior.

Selecting a theme was difficult as he has not seen any cartoon on TV yet. But he owns few Winnie the Pooh books and he likes them. Also, once when we were at the doctor’s clinic, one of the Winnie the Pooh movies was playing on the TV and he was actually laughing looking at the cartoon. That was the moment when I decided to go with Winnie and friends theme. He loves animals and he also likes his Winnie and Eeyore soft toys so we went with this theme. I got him a nice kurta with dhoti (Indian style) from an Indian lady I found on Facebook.

But Winnie’s colors are yellow and red, which do not look that good so we decided to go with blue and green (for sky and grass) color theme, along with some yellow. I can say that I arranged this party alone by myself as husband’s contribution was minimal. I selected a cake with lots of animals on it which a home baker baked for us. The cake was delicious inside as well. I also got some cookies and cake pops done with Winnie, Tigger and honey pot as the themes from another home baker who did an amazing job too. The cookies and cake pops were too delicious.

We hired an event organizer who did the decoration for us. She also gave me valuable suggestions and inputs on the party as a whole. We both worked together and got everything that was needed for the party. I bought some of the decoration stuff that I found interesting on Amazon. She got balloons and other stuff from Party City I think. The decoration was done well and everyone liked it a lot at the party. We hired a photographer for the event who took all these great pics. I looked at the Facebook pages of many photographers and did not like the work of many of them. Since I have been trying to improve my photography skills, I can differentiate a not-so-good photographer from a good photographer.

Selecting favors for kids was the toughest thing to do. We were not able to find good Winnie the pooh themed goodies online or in the shop. I finally found favor bags and goodies in Amazon with Winnie the Pooh theme. Along with these favors, we wanted to give some useful item to kids. We went to Target and bought some board games but we were not sure if kids of all age group would enjoy these games. So we again went and returned it back. We then got a huge box of crayons which we felt every kid needs, even if they have a pack already. We got the favor bags and the tissue papers from Target. I had to watch a video on how to wrap the gifts with tissue paper :P. 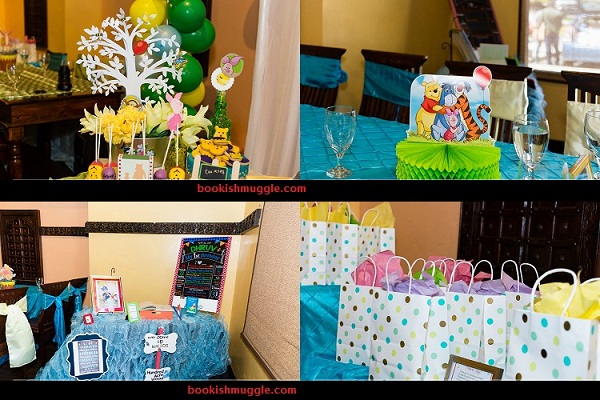 We also got a cake smash session done with Winnie theme (before the party) and got a photo of the baby with a cake for the welcome table. I then got a chalkboard done for him from Etsy with likes and other information about the baby for the welcome table. I also got an awesome Winnie the pooh quotations book for the baby from Amazon which we made guests sign. I am hoping that he will like the book along with the wishes from all the guests, once he is old enough to read it. 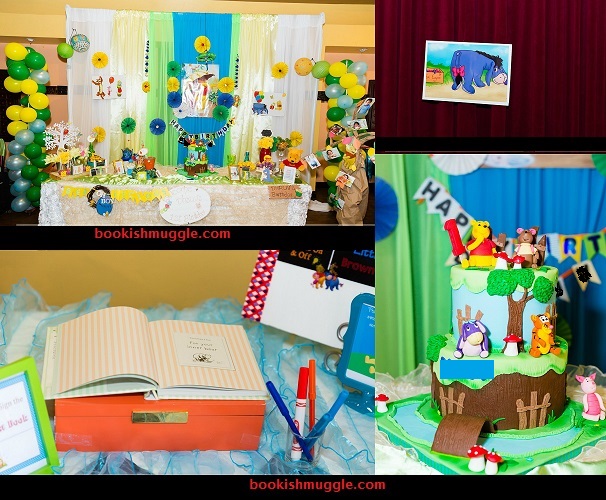 I also got this idea of having a tree with photos of the baby on branches of the tree. Our decorator created this tree and we stuck 12 photos of baby from various months to this tree. People really liked this idea and we got lot of appreciation for all the decoration. I was beaming as many of these ideas were mine. Also many of the props that you see were chosen and bought by me from Amazon. I also had a cute birthday hat for the baby which I forgot to put on his head before cutting the cake. I got some great candles which said “1” and some which had Winnie and friends, but I forgot to get the lighter or match box. You plan so much and then forget a simple thing like that. We finally had to get the lighter from the restaurant to light the candles.

It was a very costly affair as we hosted this party at an Indian restaurant for 60 people or so. This time we invited our colleagues along with friends. I think we will not do such a big party again, unless junior demands for it. I have already started planning his second year birthday party on which I am planning to spend less money. Next year, I will probably prepare some sandwiches and bake some cookies, cake pops and cupcakes for his birthday and host it at home. I am also thinking of making his birthday cake myself. This year I did not want to take any chances or risks as there were too many guests. Another idea is to host the party in a park next year. Let’s see how it goes.