How many of you have watched a movie in theatre recently?

How many of you have attended a musical/rock concert recently?

Many of you would have been to atleast one of the above forms of entertainment. However, if I ask a question – how many of you have been to a magic show or a stage drama or circus or puppet show or a ventriloquist’s show, I may not even get a single ‘yes’ response back.

These old forms of entertainment have completely been sidelined, since we like loud music/movies these days. So what is happening to all the magicians and other people who have learnt this art of entertaining people? They just do not have enough audience to watch their show and are losing business. As a result, many fine artists have probably lost everything, since the advent of TV. People watch TV and are no longer interested in going to such shows. It is really sad that TV is suppressing every other form of art these days. How many people actually visit a museum or art gallery these days? When you can see everything on Discovery or NG, why would you want to spend time and visit a planetarium, for instance? And now with Internet available at our fingertips, things are getting worse.

So what do you think about these other forms of arts? Should something be done to encourage them? What do we do in order to make people attend such shows?

This is the theme of the movie : L’illusionniste (a french animation movie).

It was a very touching movie about a magician Tatischeff  who has just lost his job. He meets a girl Alice, who is a fan of his magic tricks. And then he travels around searching for a job along with the girl. People attend a rock show and do not even stay back to watch him perform. Only an old lady and a kid watch his show. It was so sad to see that people are no longer interested in such things.

When the girl asks for a shoe, he works hard and buys a pair for her. He makes them appear magically and the girl is really delighted. Thus she becomes the only fan of his magic tricks. After that they stay at a hotel, where there are other people like a ventriloquist, clown, acrobatic brothers who are later shown as losing jobs themselves. We find the ventriloquist guy begging on the streets, while his doll is for sale in a shop 😦 . The acrobatic brothers take up the job of painting walls while doing acrobatics. Every performer is in a really bad state since people do not want to see them perform anymore.

There are hardly any dialogues in the movie and it has been picturized very well. This movie was even nominated to Oscar’s last year. 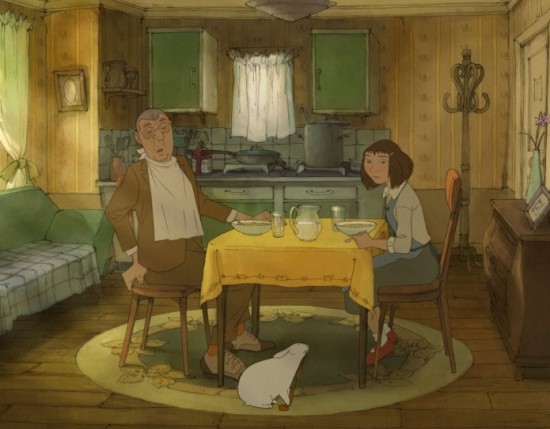 He finally leaves the town with a note “Magicians do not exist.”. That scene really made me feel so pathetic, since I am also a culprit. This movie is trying to send a message across and I realized that we have been ignoring other forms of art a lot lately. I have resolved to spare some time for these shows too in future.