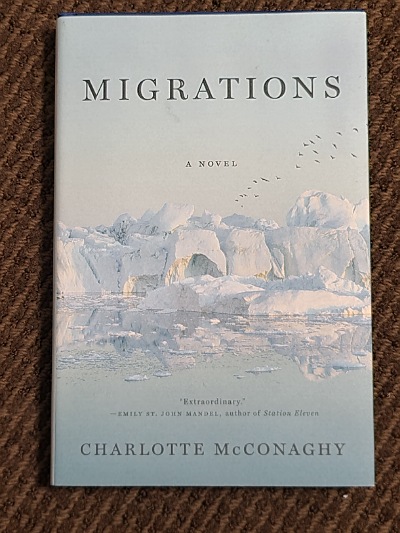 Migrations is a novel that got released in 2020 and is written by Charlotte McConaghy who is an Australian author . I had no idea that this book was even released this year as I saw zero reviews anywhere online for this book. Amazon declared this as one of the best books of this year and while going through that list, this book caught my eye. I first thought this was probably a non-fiction book but upon reading the synopsis, I got to know that this is a dystopian fiction.

This book is about a dystopian future when most of the animals that we know today are extinct. It is about a woman Franny Stone, who follows Arctic Terns on their what might be a last migration from Arctic circle to Antarctic circle. “Arctic Tern has the longest migration of any animal. It flies from the Arctic all the way to Antarctic, and then back again within a year.” I will be honest. I had no idea about these birds until I came across this book. I did a lot of research on these birds and I found their migration really fascinating. One question I had was “why do these birds migrate for such a long distance?” and the answer I found was that, they find abundant fish in Antarctic during summer (when it is winter in Northern hemisphere) and when it becomes cold there, they come back to Arctic. They just follow sun’s path as earth revolves under the sun. More sun means better weather for them to fly and more light to spot fish to eat. As the author mentions in her Acknowledgement page, I honestly wish that such beautiful birds never become extinct. I hope the bleak future presented in this novel doesn’t end up as reality in the future.

We, humans, are causing a massive extinction of all animals by causing climate change, dumping waste and oil into oceans, deforestation, hunting animals and so on. Human greed has no bounds. The only planet which can support life is headed towards a path of destruction, thanks to this human greed of wanting to have it all. Many humans think that they own this planet and not that they are sharing it with other animals.

I would like to quote Carl Sagan here (You can read the entire essay here : Link to essay) –

“Our lovely blue planet, the Earth, is the only home we know. Venus is too hot. Mars is too cold. But the Earth is just right, a heaven for humans. After all, we evolved here. But our congenial climate may be unstable. We are perturbing our poor planet in serious and contradictory ways. Is there any danger of driving the environment of the Earth toward the planetary Hell of Venus or the global ice age of Mars? The simple answer is that nobody knows.”

I had a feeling that this novel might be similar to “Where’d you go, Bernadette” as both the novels involve travelling to Antarctica and to some extent, I feel it resembled that novel. While Bernadette novel was light-hearted, this novel was pretty serious in tone. So when the novel starts, we have no idea why Franny is trying to follow the birds or what really happened in her past. She is trying to run away from her troubling past which is slowly revealed as the story progresses. The novel switches back and forth between her past and present and it was done really well.

The commentary and discussions about climate change and dying animals was great. The journey of Franny on a ship from Greenland to Antarctica was interesting. The author has done her research well and it is a well-written novel.

I loved these lines about how selfish humans are by nature –

“They had to choose the more important animals, the ones we need and those with a chance of survival, letting the no-hopers fade into extinction.

Saving specific animals purely on the basis of what they offer humanity may be practical, but wasn’t this attitude the problem to begin with? Our overwhelming, annihilating selfishness? What of the animals that exist purely to exist, because millions of years of evolution have carved them into miraculous being?”

I think it’s high time people realized that climate change is not a hoax and did something to save our planet and all the beings on it. I hope more people read this book and other non-fiction books about climate change and actually DO something! I find the world depicted in this novel really frightening. A world without birds and animals would be humanity’s worst nightmare.

“We are no more worthy of life than any living creature. That in our self-importance, In our search for meaning, we have forgotten how to share the planet that gave us life.”

The only reason why I gave this book 4 stars, instead of 5 stars is because I felt the story was a little bit melodramatic and actions taken by some characters did not feel realistic sometimes. That usually happens with me when characters are too goody good like in A man called Ove or The guernsey literary and potato peel pie society books. I like darker characters with grey shades as I feel that makes a story more realistic. Otherwise, the book was great as the author did a good job of building the suspense and the reveal at the end was unpredictable too.

I feel this is an underrated gem of a book that more people should read.