I am a fan of the thriller genre in general, but being a nerd, I prefer sci-fi thrillers. I get the best of both genres – Science Fiction genre and Thriller genre. Sci-fi thrillers usually have some suspense element and are centered around either a creature wreaking havoc to some scientific research or some aliens who decide to destroy Earth or something else which keeps us at the edge of our seat until we are done with the book. These books hook you and are fast paced while also having some hard science elements in them.

[I have a giveaway on my blog, if you haven’t already noticed. Link to the giveaway.]

The author who got me into sci-fi thrillers is the one and only Michael Crichton. His books were thrilling while also having some science, the combination which I have come to adore.

I saw the movie adapatation of Jurassic Park as a kid and it was a movie that I have watched a million times. I also read the books written by Michael Crichton on which the movies were based on – Jurassic Park and The Lost World, both of them talking about Dinosaurs recreated by humans. Even though the movies will remain a favorite, I loved the books too since they were even more thrilling. The movies did not have a lot of scenes from the book. The book also had lot of science and Malcolm and his predictions were what made me love the books.

I also loved some of the other books by Michael Crichton like The Prey which was probably his best book, outside the Dinosaur series.  Prey is about nanoparticles or microrobots which escape from a research lab and it was one of the most terrifying books I have ever read. Andromeda Strain was a good thriller too, except for the anti-climactic ending.

After reading multiple books by Michael Crichton, I was in search of an author who could write similar thrillers. That’s when I came across Blake Crouch. His style reminds me of Crichton for some reason. I think if you like one author, you will like the other. Dark Matter was a great thriller centered around the concept of multiple parallel universes. Some people have a problem with the science presented in the book and do not even consider it to be a sci-fi, but it very well is. I had no problem with the science aspect too. It is after all fiction. A lot of science fiction books have science which is far from reality.

Blake Crouch also has a trilogy named Wayward Pines. I recently got all the 3 books in the series during a sale and I am very eager to read them.

The one author who is most famous for thrillers is Dan Brown. I like his books as they have references to places, symbols and historical sites. Some of his books fit the sci-fi thriller genre as they have some science in them like Inferno which is about a plague virus. He has written some proper sci-fi ones too like Deception Point and Digital Fortress, which I am yet to read.

The other author who has written multiple sci-fi and fantasy thrillers is the famous Stephen King. I still have not read any fiction written by him. Horror is a genre that I have only started reading recently, after mustering some courage. I want to read at least one of his books by end of 2019. His books like It, 11/22/63 and Stand are on my tbr.

The other thriller which shot to fame recently because of a movie adaptation was The Martian by Andy Weir. I devoured the book in 2-3 days as it was impossible to put it down for even a minute. It had some hard science elements too which made it a favorite book of mine. I did not like Artemis by this author though, because of the annoying main character.

Ready Player One by Ernest Cline is a book that might fit this category too. It was fast paced and mysterious enough to keep me turning pages. I think I finished this book in a day or two. I liked the movie adaptation too for which I eagerly waited for like 7 years or so, even though it differed a lot from the book.

Ender’s Game by Orson Scott Card was thrilling too as there is a war to be fought with aliens. The great ending of the book made up for the slow start.

There are some classic sci-fi books that are considered thrillers, but by today’s standard I wouldn’t consider them thrillers – Frankenstein by Mary Shelley, books by Jules Verne.

Books by H.G. Wells like Invisible Man, The Time Machine, War of the Worlds can still be considered thrillers since I still find them scary and horrifying.

There is Robot Series by Isaac Asimov. They are suspense novels, more on the lines of crime fiction as they involve murders and investigation.

There are some YA sci-fi or dystopia thrillers like Hunger Games by Suzanne Collins which was so disturbing that I did not have the courage to pick up the sequels.

There are weird sci-fi books like Annihilation by Jeff Vandermeer. The book reads like a thriller. It is fast paced and keeps you on the edge as some female scientists try to explore an unknown alien landscape. Every mission before theirs was a failure and scientists never returned from their mission. The movie adaptation was loosely based on the book so I wasn’t a fan of it.

I am not sure if this book can be called a thriller but it does keep you hooked and it is thrilling and chilling enough so I will just put it here. It is The Road by Cormac McCarthy. It is a post-apocalypse novel which has a son and a father walking on a road when most humans are dead. It was definitely one of the most powerful novels I have ever read. 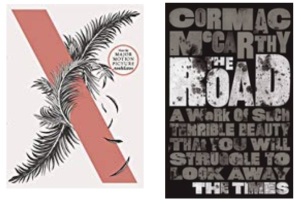 Have you read any sci-fi thrillers? Do you like this genre? What are your favorites from this genre?