I attended my first Worldcon (Worldcon 76) last weekend and it was amazing!

This was the first literary convention I had ever been to and it will definitely not be my last. I hardly have friends in real life who are into reading books, let alone reading SFF books. So it was great to attend a convention full of book nerds and on top of that, those who love the genres that I love reading.

The convention was for 5 days, but I could only attend it for 3 days. I have not met many authors in real life so the main reason for attending Worldcon was to meet authors. I wanted to meet my favorite SFF authors and to get some of my books signed from them. So I carried a bag full of books to get autographed on all 3 days and that literally broke my back. I have been suffering from back pain ever since I came back. Other than the books that I carried for signing, I also ended up buying plenty of books at the convention. Most of the books on sale there were at a discounted price or were signed by authors. I also got some books in order to get them signed from authors. Day 1, I only took one book by each author and then realized that people were getting 3-5 books signed from each author. So next day, even I took multiple books for signing.

I had the pleasure of meeting George R R Martin. I couldn’t meet J R R Tolkien when he was alive, so I have to manage with meeting my second favorite author. I cannot tell you how happy I was to meet him and to get my book signed from him.

I also got to meet Brandon Sanderson. Even though he is not a favorite author of mine, he still is churning out plenty of fantasy books and his world building is amazing. When he ran out of time, he asked me to come back. And when I did go back for signing, he was really sweet and asked me to skip the line. He remembered that he had asked me to come back and signed all my books.

I also got to meet my current favorite Sci-fi author: John Scalzi. I got multiple books signed by him. All these 3 authors had huge lines, considering how popular they are. The other authors also had lines but not quite so much.

I also attended few panels but the conference rooms where the panels were held, were too small and most of the authors were not even given microphones. As a result, they did not let me inside some of the panels since they were full and in some panels, I had to stand in a corner. Some of the panels that I attended were great like the one on “Why authors kill characters” or the one on “Apocalypse and diversity” or the one about “non-white authors”. I also attended some readings by authors. John Scalzi was really funny even in real life. No wonder his books are full of humor.

There were some coffee sessions with authors available and I attended the one with Marie Brennan. We were 10+ people having coffee with the author and we were able to ask her questions. It was a wonderful experience and I wish I had signed up for more such sessions with other authors too.

I also ended up meeting BooktubeSFF gang at the Worldcon. There are a bunch of youtubers who make SFF related content like Rachel, Joe, Thomas, Kelsey, Bree and I was able to meet them all at one of the panels. It was almost like meeting celebrities as I watch their videos every other day. The best part was that they recognized me as I keep leaving comments on their videos.

The highlight was Hugo Awards ceremony. I had never even dreamed about attending it and there I was in the audience, having voted for my favorite books. N. K. Jemisin won the best novel award again this year. She is the first author to have won Hugo three times in a row. Most of the awards went to women and I was so happy to be part of this ceremony.

I cannot even express how happy I was to attend the Worldcon and Hugo award ceremony.

I bought way too many books and there were also some free books available for us to take with us. Most of these were either signed or I got them signed. This is my bookhaul from Worldcon – 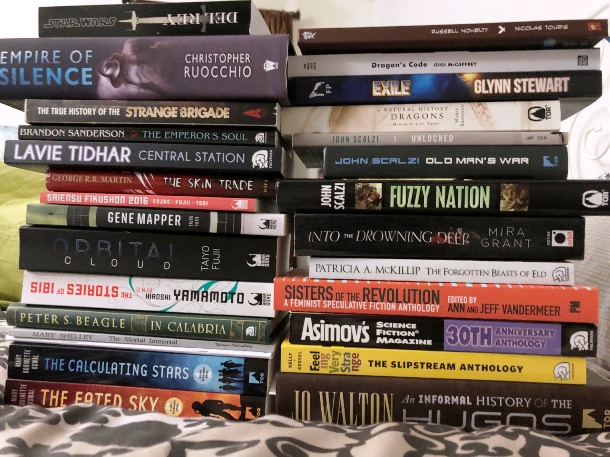 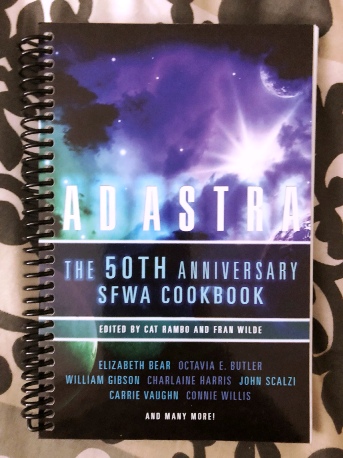 It was a wonderful experience and I am planning to attend few more conventions in the future. Even though I went alone to the convention, people there were very friendly. Someone standing behind me or in front of me in the queue or sitting next to me in the panel would strike a conversation and we would end up talking about authors, books and about the conventions. It was great meeting like minded people. This is something that I really like about living in US. People are friendly and do not care about your race or skin color. They can smile and talk nicely to even complete strangers. At one point, a Caucasian guy and an African American guy were having a conversation with me, an Asian. They even got couple of my books signed for me. I am going to cherish my Worldcon visit for a long time.

12 thoughts on “My First Worldcon”