Last month, I finally finished all the Scott Pilgrim graphic novels in the series by Bryan Lee O Malley. I started this series 7 years back when the movie first came out. I read 2 books and then never read the others. I was recently searching for a movie when I noticed Scott Pilgrim movie and I felt like watching it again. This time, I decided I will read all the books and then watch the movie. So I did exactly that and felt that the books are better than the movie. 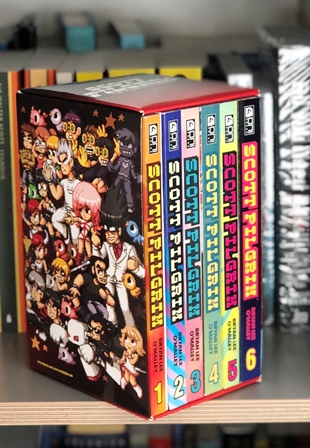 This is a funny series about love, relationships and friendship. The story begins with Scott Pilgrim (in his early 20s) dating a teenager after suffering a recent heartbreak. And then he ends up meeting Ramona, his dream woman. That’s when the actual story kicks off. Ramona has 7 exes and now Scott is supposed to fight them. Each volume in the series deals with a different ex with whom Scott ends up fighting. There are 6 books because 2 of the exes are twins and they make an appearance in a single volume (volume 5). The art work is great, but it is done in manga style with just black ink (no coloring). If you have played older video games, you will relate to some cool video game references.

I gave the series an overall rating of 4 stars. The breakdown is as follows –

Book 1 – 4.5 stars – The second best novel in the series since it introduces us to all these wacky characters. I initially had given this 4 stars when I read in 2011.

Book 2 – 4 stars – Bumping it to 4 stars (from 3 stars given in 2011) since Knives was so good. Only problem was that it was little difficult to tell the characters apart in this book, since everyone looked so similar.

Book 3 – 5 stars – My favorite one in the entire series. It was my first time reading the third volume. It was funnier than the second part because of the vegan psychic powers. Todd was hilarious. But there were some flashbacks to the period when Scott was dating Envy and they weren’t that clear. I got confused between the various female characters since everyone looked similar – looks wise and also in the way they spoke or behaved. Other than that, loved it.

Book 4 – 4 stars – Yet another funny volume in this series. This time Scott has to fight with two people who are trying to kill him. And also there is some major development in his love story with Ramona. A new character Lisa enters the book.

Book 5 – 4 stars – This time Scott fights with the twins and some major developments happen in his relationship with Ramona. This was one of the better ones in the series.

Book 6 – 4 stars – A great ending to a great series as Scott fights with the last remaining ex.

Comparing with the movie – 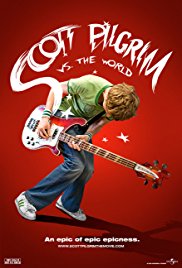 It’s good that I read it 7 yrs after watching the movie since I didn’t remember anything from the movie. That way I didn’t end up comparing the books with the movie and had fun reading them. I saw the movie again right after finishing this book and I must say that I prefer the books. The evil exes are so much more interesting in the books. Especially the last evil ex boyfriend plot, which is completely different in the movie.

{Spoiler: The reason why Ramona leaves Scott is also different in the movie. }