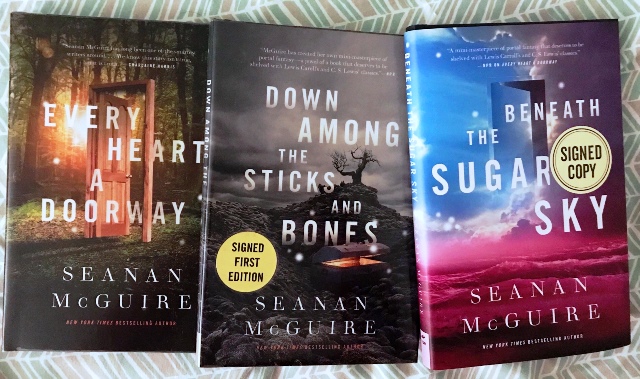 If you did not know already, Alice in Wonderland is one of my most favorite books ever since it is a portal fantasy. Alice ends up in a land which is totally different from ours by following a rabbit. So when I heard there was a new fantastic portal fantasy series, I had to pick it up. I am so glad I read all the 3 books in this series as they are wonderful. The first book “Every Heart a Doorway” even won a Hugo award this year in novella category.

These books are about a school for children who have come back from other fantasy worlds and have difficulty in coping up with the normal world. The first book “Every heart a doorway” has an asexual main protagonist Nancy who has just arrived at the school and then there is a mystery surrounding the death of a student. The world building is great and the characters are also pretty diverse as there is a transgender character too in this book. The school is run by a woman who herself has returned from a fantasy world and is searching for a door that can lead her back to the world she left. The story and the setting is very different from what we have read in other books. Children here miss the worlds they came back from and nobody can understand their grief, not even their parents who most likely won’t it even believe that there are other worlds out there. The descriptions of these other worlds and how children are desperate to get back to those worlds was done well.

The second book “Down among the sticks and bones” is my most favorite among the three books in the series. It talks about bad parenting and what happens when parents treat their children as commodities and not as little humans. This book is about Jack and Jill who make their appearance in the first book and this is sort of a prequel as it talks about the world from which Jack and Jill had come back to our world. The world which they enter is a terrifying one and has moors with vampires, werewolves and a freaky doctor but the book as such was not scary. This book even had an LGBTQ romance in it.

The third book “Beneath the sugar sky” which got released this month continues the story from the first book “Every heart a doorway”. This time there is a new girl in the school Cora who was always ridiculed for being fat in her previous normal school, which she attended before entering her portal world. There was a lot of diversity in this book too – Japanese, Arab, disabled, and fat people – they all got representations just like LGBTQ community got in previous books. The characters here visit couple of other worlds like land of the dead and confection which were the most interesting parts in the book. However, this is my least favorite of the three books as it got preachy sometimes and also the plot rushed through because of which we did not get much time for character development I guess. Also we were introduced to many new characters in this tiny book.

I think it is better to read the books in the order of publication as the second and third book will spoil the mystery aspect in the first book. I love the writing style of this author and I plan to pick more books by her sometime, especially the ones she has written under the name “Mira Grant”.

If you love portal fantasy or diverse fantasy or just fantasy in general, this is a great fun series to read. Also since they are novellas, you can get through them very quickly in a day or two. I am hoping that we get more books in this series. I gave this series 4 stars as a whole.