I have never been a big fan of audiobooks and have not particularly liked audiobooks that much. That changed this month thanks to an audiobook.

I think my first audiobook was Ready Player One written by Ernest Cline and narrated by Wil Wheaton. Listening to that book was an amazing experience and mostly because of Wil Wheaton’s great narration, I ended up really enjoying the book. I even mentioned that I gave one extra star to the book mostly because I listened to it on an audiobook. This was back in 2011. After that, I never felt the need to try audiobooks.

Last year I decided that I wanted to use the commute time to listen to some audiobooks. I downloaded Neverwhere by Neil Gaiman after I got to know that he himself had narrated the audiobook and that it was quite popular. The starting was great and I was enjoying it. But after some 25% or so of the book and then once the story switched to the other London, I didn’t enjoy it much. The story became even more weird and people were worshipping rats and what not! I then stopped listening to the audiobook since I got bored. I am still not sure if it was because the story was boring or if it was the narration.

I, then, decided to try audiobook for Night Circus by Erin Morgenstern which again got boring after a point. Then, I tried We always lived in a castle thinking it might be creepy and wouldn’t get boring. But again I got bored after I reached a point. That was when I decided to give up on this format altogether. After DNFing 3 audiobooks successively, I had a feeling it was the format which made me dislike these books. After all, all these books are popular and loads of people love them. So maybe I wasn’t meant for audiobooks?! 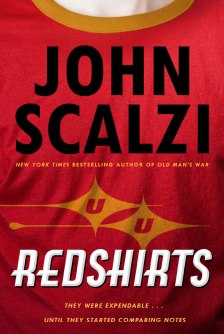 And guess what?! I loved it! It is now one of my favorite books of all time. So it was the narrator after all! Wil Wheaton narrates in a humorous fashion by changing voices and it never ever gets boring. And the book was equally good. It is one of the funniest books I have ever read. Redshirts reminded me of Hitchhiker’s guide to the galaxy a lot. If you like Star Trek, you should definitely read this book. I am now going to try more books by Scalzi. I laughed out loud multiple times which rarely happens. This book put me in such a good mood that I did not want it to end. There are plenty of funny conversations in this book and I think audio format works perfectly for this book.

I am now currently listening to two more audiobooks – The storm front by Jim Butcher which is okay. I am not enjoying it that much and sometimes even felt bored. The second book that I am listening to is His Majesty’s dragon by Naomi Novik which I am actually enjoying a lot so far.

So if you are new to audiobooks and don’t know where to start, start with Wil Wheaton’s books. Any book that he has narrated is bound to be good mainly because he is an awesome narrator.

Any other narrators you folks like? Please do recommend some to me.

10 thoughts on “Wil Wheaton and audiobooks”