After reading Jane Eyre in February and liking it, I was interested in reading other books by the Bronte sisters. I picked Wuthering Heights by Emily Bronte this month expecting it to be boring in parts like Jane Eyre. I had a feeling I would end up reading this book whole of March and maybe in April as well. But I could not be more wrong as this book gripped me totally and I could not pick up any other book until I was done reading this book. 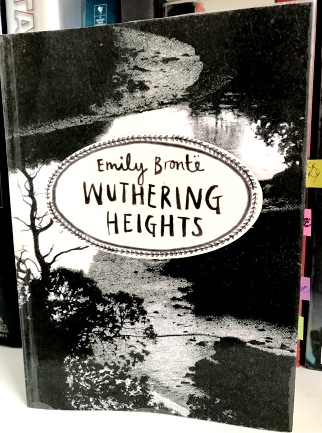 Wuthering Heights is a revenge story and even though people refer to it as a love story, I don’t quite agree with that. I did not feel this book was as romantic as Jane Eyre was. The characters in this book are dark and twisted which is probably the reason for loving it so much. I always prefer books with imperfect characters who do mistakes and are not always good and noble, as it closely resembles the real world we live in. This world has more evil people than nice people.

Many people are a fan of the main protagonist, Mr. Heathcliff in this book. But I despised that man and could never understand why so many people liked him. In fact, I despised every single character in this book as they were all flawed and every one had their own weakness. I do not remember reading a book and loving it, despite the fact that I did not like any character in it. This book was probably my first. It is now one of my all time favorite books.

The story spans across multiple generations and this one person takes revenge on two different families, just because his love for a woman was unrequited. How he torments and tortures folks just to get his revenge is shocking, to say the least. I have never read about a more evil character I think.

What does one gain from seeking revenge? Is a person really happy and satisfied after he destroys lives of his enemies? What if you have lot of money but there is nobody to love you?  What if you destroy somebody’s life but that person is so nice that they cry for you when you are hurt? What did you exactly achieve by destroying somebody’s life? Emily Bronte tries to answer all these questions.

“It is strange people should be so greedy, when they are alone in the world!”

“It is for God to punish wicked people; we should learn to forgive.”
“No, God won’t have the satisfaction that I shall”

“People feel with their hearts, Ellen, and since he has destroyed mine, I have not power to feel for him, and I would not”

“I’d rather he suffered less, if I might cause his sufferings, and he might know that I was the cause.”

“You have left me so long to struggle against death, alone, that I feel and see only death! I feel like death!”

Some scenes were so powerful that I feel like reading the book all over again. I could not put this book down once I had started it. Classics are usually boring and not this interesting. This book was an exception. Even though it was a classic, it was a fast read and I was desperate to know what would happen at the end. I would recommend this to folks who find classics boring. The ending could have been little better though I felt. I liked the way it ended but was not completely satisfied with it.

Writing, characters, plot, pacing, narration – 5 stars for everything. The only parts I had difficulty with were the ones where Joseph and some of the other servants talk. They talk in a weird English and I couldn’t understand what they were trying to say.

Now need to watch some adaptations of this book.

Updated: I watched the 1992 film adaptation with Ralph Fiennes as Mr. Heathcliff. It was faithful to the book and the actors did a great job too.

What I did not like about the ending was that Mr. Heathcliff never repented nor realized that what he did was wrong. Even after he destroyed so many lives, his death did not seem to involve suffering. Also people around him did not think of punishing him for what he did. Especially after how he let his son die without even bringing in the doctor. Maybe he got a sad lonely death which he deserved. His body too should not have been buried where he desired to have it buried. I hate that man so much!