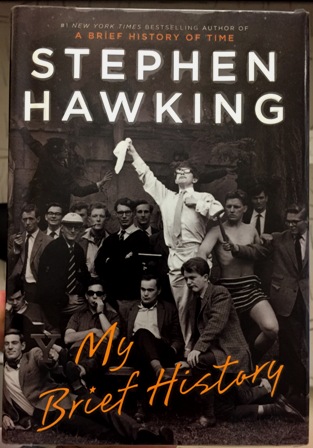 This is an autobiography of the famous physicist Stephen Hawking. He is one person who has probably inspired me the most in my life. His book “A brief history of time” made me fall in love with physics more than a decade back. So happy that I read this book finally about him and his research.

He talks about his childhood, his parents and siblings in the first few chapters. One interesting fact is that I could relate to his father a lot. His father sounded so much like my own father sometimes. Then he starts talking about his early education and how he got into Oxford and then Cambridge. He also talks about the onset of the incurable disease which caused him to become disabled for the rest of his life.

I loved this book SO much that immediately after finishing it, I started regretting for not picking it up sooner. I wanted to read this book as soon as I heard it was released but it was costly. Recently, I saw it on deal and bought it. I am so glad that I did buy the book. His life is inspiring and he has contributed a lot to Physics, despite his disability. I will read this book again for sure.

Some of my favorite quotes from this book:

“Physics was always the most boring subject at school because it was so easy and obvious.”

“When you are faced with the possibility of an early death, it makes you realize that life is worth living and that there are lots of things you want to do.”

“I believe that disabled people should concentrate on things that their handicap doesn’t prevent them from doing and not regret those they can’t do.”

I have reviewed his book “The grand design” on my blog.

15 thoughts on “My brief history by Stephen Hawking”