Flatland is a science fiction novel published in 1884. I finally got hold of the book and finished reading it today. It is a very short book but since I don’t have much time to read these days, I took a week or so to finish it. My edition had like 133 pages, but I guess some editions have 60 pages or so.

The title of the book says – “Flatland: A romance of many dimensions by a Square”. This book is narrated by a square (a two-dimensional geometric figure). The author of the book mentioned inside the book and not on the cover is Edwin A. Abbott. 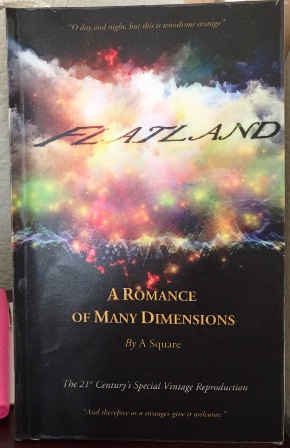 Looking at the title, I thought it was a book on romance – something like square falling in love with some other geometrical shape or something (I was so wrong!). Even the reviews that I read or saw did not explain properly what this book was about. My curiosity made me pick up this book. I read this book with very low expectations thinking that I will not like it.

This book is as I said earlier is narrated by a square. First half of the book explains what it is like to live in a “Flatland” which is where the square lives. Flatland is basically a world which only has 2 dimensions – length and breadth. There is no concept of height in this world and every person who is living is a two dimensional geometric figure – lines, triangles, squares, pentagons, hexagons and other polygons live in this land. Regularity is given a lot of importance and circles rule this world. Understanding how this world works was probably one of the best parts of this book. Every person in Flatland appears like a straight line so it is difficult to identify each other. Concepts like how do you figure out whether you are talking to a triangle or a hexagon were really interesting.

I had never given a thought about two dimensional world earlier so I found this book extremely fascinating. The second half of the book was even more interesting as this square travels to “lineland” which is a one-dimensional land where only lines and points exist who can only move northward and southward. They don’t even have the concept of left and right. My mind was blown reading descriptions of this world. Some concepts do look silly in this land but if you ignore those, you will really enjoy even this part of the story.

Now that we know many more dimensions than three can exist like time (which is the fourth dimension), I feel this book was way ahead of its time. Even before Einstein’s relativity equations came, this author was thinking about multiple dimensions which is so amazing.

I saw some reviews that said that the book was misogynist or sexist and the women in these worlds weren’t represented in a good manner. This book was written in 1800s and this is how the society viewed women in those times. The author was not a misogynist as he says that women should be given education, even though in that world they were not given education like men were given.

The quote that square keeps repeating in this book – “Upward and yet not Northward”.

I loved this book. If you like mathematics, please do read this book. It’s great as long as you don’t expect it to be a typical novel.