I wrote a post on One Republic band here and also cribbed about how I missed their concert last year. And then what do I see? I see an update that they are doing a tour again this year. This time I did not want to miss their concert. I immediately checked the venue and it was in Concord, which is far from where we stay. It would take us an hour to drive to that place. Since the show would go on until midnight, we will have to drive back in such an ungodly hour from a dangerous locality. I got strict NO from husband, when I brought up this idea of attending the concert. Also all the good seats were already taken, which would mean that we have to sit in some of the last rows. I gave up the idea and just resumed to the usual monologues – “you will not do anything for me”. This is my way of getting back at him, whenever he says no for anything.

Then one day, I opened my Facebook account just like that and saw an update from One Republic. The update said that since all the shows were already full and people were still interested in attending their concert, they have added more venues to their tour. I quickly opened the link and found Mountain View on it. I could not believe my eyes. This venue is pretty close to where we live, so there was no question of not going to the concert. I checked the concert date and realized that my parents will be here during that time.

I then, booked 4 tickets – for me, hubby and parents for this concert. I got good seats too since I bought the tickets a day before they were released to the public, thanks to the code available on their Facebook page. Why parents? Because they have never been to a concert before and not to any live event in US. I wanted them to experience this at least once. My mom listens to English songs, because of my influence. Dad is interested in anything and everything under the sun. He is like me, or rather I am like him. Husband has also memorized most of their songs, courtesy me. I keep playing their songs in a loop, all the time. It was great fun attending the concert. 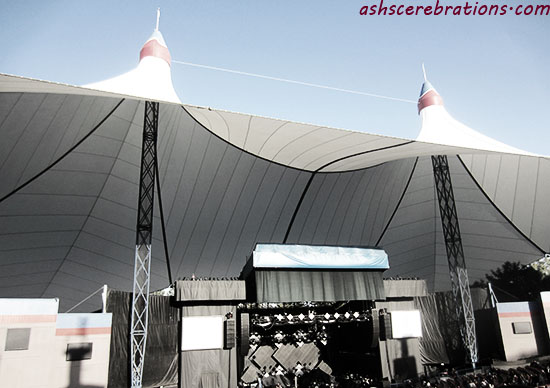 The only problem was : reaching the venue. Mom, dad and I took a cab who dropped us close to the venue, but we had to walk for a long distance. Hubby decided to drive directly from office, because of an important meeting. I was stunned looking at the crowd. The roads were completely blocked. Vehicles were hardly moving. Even when we entered the theater, we could see that it was very much crowded.

As soon as we got seated, the concert began. “American Authors” kick-started the show. So far, I had only heard one song of theirs – “Best day of my life”. But I love the song so much that I was excited to watch these folks from Brooklyn, New York perform live. The stadium was half empty as most of the people were stuck in the traffic I guess.

American Authors performed some of these songs – “Luck”, “Believer”, “Home”, “Trouble”, “Hit it” and “Best day of life”.

And then “The script” took the stage. I had no idea that they were an Irish band from Dublin. I love some of their songs like “Breakeven”, which is one of my favorites. They were terrific on stage. People got up from their seats and blocked my view. So I had to stand up and watch them perform. They made people switch on the flash light on their mobile phones and then wave their hands.

Most people in the audience were teenage girls, who looked more like school girls. 😛 I guess this is what happens when you go to a boy band performance and that too, boy bands which are currently famous.

Husband had still not come. Two bands had performed and gone. But he was still stuck in the traffic. He left his office at around the same time that we reached the theater. So he was stuck in traffic for one and a half hours. Yes! no kidding. There are only two roads that lead to this venue, so you can imagine what happens when there is crowd. Right after “The script” finished their performance, husband entered the theater.

And then “One Republic” started their much awaited performance.  It was dark by the time they came on stage, so there were these awesome lights that were used for effects. People refused to sit on their seats, so even we had to watch the show standing. They performed almost all the good songs, except for “Marching On”. That made me little sad as I feel it is one of their best. I did not know that they came up with “Good life” lyrics suddenly after they came back from London. Hearing such tidbits about them in between the songs was interesting. They thanked everyone for helping them break records. 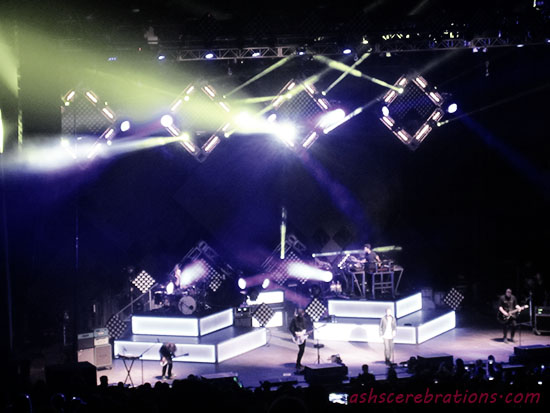 It was a memorable day, well spent. After listening to them perform live, I am loving them even more. Listening to their songs on radio doesn’t have the same charm that was there in seeing them perform live. Live performance was simply mind-blowing. I hope to attend more such live performances in future. I have always attended concerts by some yesteryear rock/pop stars like Bryan Adams, Enrique Iglesias, Jennifer Lopez or Indian singers like Sunidhi Chauhan and Ali Zafar. So this was a different experience as these bands are currently popular.

17 thoughts on “One Republic and The Script concert”