There was a time when I was very picky about food, but not anymore. I had written a post here earlier about how I am finally able to experiment with food and try out new cuisines. Recently I got to try Morocco’s cuisine which I had never tried before. In fact, I did not even know that restaurants from this country even existed in US. My team was taken to this restaurant for lunch and I went with the idea that I will not like the food. I glanced through the menu and I had no idea about most of the dishes. Then our team came with the idea of having a family style lunch, where you order multiple dishes and share them. That sounded good as I no longer had to scratch my head to select a dish. My boss did that on our behalf.

Morocco’s restaurant is located in Mountain View, California on the Castro Street, closer to El Camino Real. I love walking on Castro Street as it is lined with restaurants on either side of the road. The downtown feeling that you get there is unmatched. But we end up having difficulty in finding a parking spot on that street as the restaurants are usually crowded. Thankfully, we found a spot right in front of the restaurant. There are multiple parking spaces in front of this restaurant, so parking should not be a problem.

The ambiance inside was very different. Morocco is an African country, so we could see some Arab/middle eastern style decor inside. The whole restaurant looked like it was inside a tent. The first thing that came to my mind was the movie Casablanca, whose story is based in Morocco’s largest city Casablanca. 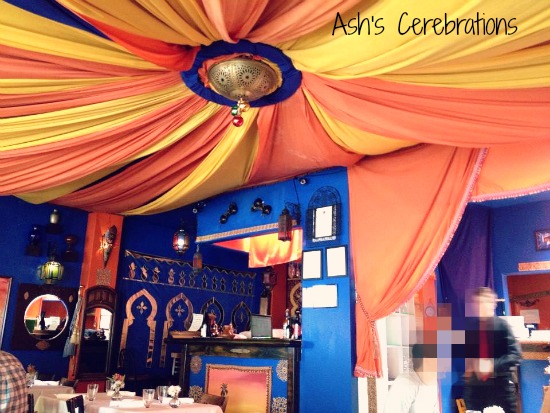 Some people bought alcoholic drinks, but I hate alcohol (mainly because of the smell and taste), so I went for their “Hot Mint tea“. I never expected the tea to be that good. I made a mental note to order this tea when I visit this place again. It had a minty taste and was refreshing.

Then the starters came – Mediterranean Salad and Signature Lentil Salad. Mediterranean salad had too many raw vegetables, so I did not really like it. I hate salads which are made of lettuce, broccoli etc. I prefer to have cooked vegetables. But the lentil salad was very good. It was very tasty. It ended up becoming my most favorite Moroccan dish.

And then the main dish came – Couscous with Caramelized Onions, Saffron-Oregano Basmati Rice and Vegetarian Tagine. The saffron rice was okay and vegetarian tagine was also okay. I have tasted couscous before, some 6-7 years back I guess (God! I sound so old). I remember thinking that it tasted like upma. But this time, I did not like this dish that much. I think it was because of the caramalized onions. That made the dish very sweet and I did not like it very much. I would have definitely liked it had it been little spicy. 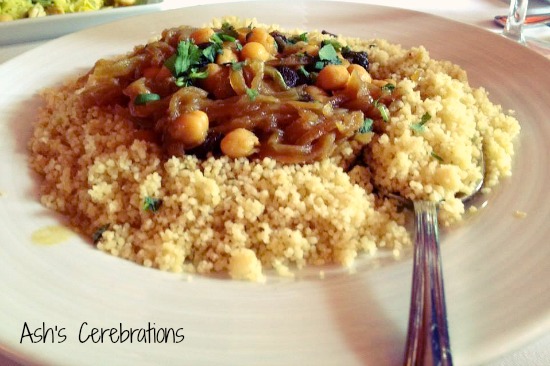 One interesting fact we noted was that almost all the dishes had honey in them. Probably that’s a specialty of Moroccan dishes. Even the dessert had honey in it. The dessert consisted of orange slices, with honey and cinnamon powder. I liked the dessert, mainly because of all the honey in it.

And I had no idea that they had “belly dancing” and other shows for dinner daily. This board outside the restaurant was interesting, so I had to take a snapshot of it. 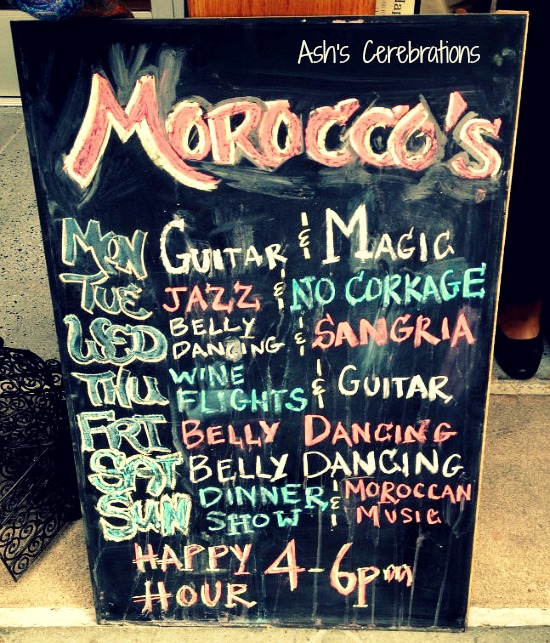 P.S: This is not a sponsored review.