Every single website that I browsed while we planned for our Death Valley trip, mentioned Artist’s drive. So we at least knew that we must not miss this point. We wanted to catch sunset at this point, if possible. We started driving on this road which you can only enter on the way back from Badwater Basin.

We came to a point where we saw plenty of people looking at the canyons and assumed that was the Artist’s Palette. After climbing a rock and taking a look around, we realized it was a different point. We again rode ahead and reached the real point which had colorful rocks. We could see the sunset, but the sun was covered with clouds so the rays could not reach the rocks and we could not see the colorful display that they talk about. We did see the colors but they were not bright enough and my camera did not do a very good job of capturing them. So I will just leave you with the sunset photo that I took there.

Star Wars: Death Valley was famously a stand-in for Tattooine, Luke Skywalker’s home planet in the original Star Wars. Sci-fi buffs will certainly want to cruise on the one-way Artist’s Drive for a look at the multihued geology and R2-D2’s Arrojo, where the feisty droid made his getaway after Luke pried off his restraining bolt. Source: Link

On the way back from the point, this artist’s drive is very steep at some places and actually scary to drive. We were thankful that there was some light left even after the sun set so that we could see the curvy road ahead. We called it a day as it was completely dark by the time we exited this drive.

We planned on having an early dinner as we had skipped our lunch. We headed towards Furnace Creek Lodge to have our dinner. Reservation is required if you want to have a dinner at the lodge. Disappointed we headed towards Furnace Creek Resort where we stayed on the previous night. This resort is really good, with multiple restaurants. It is definitely one of the best resorts I have stayed in. Unfortunately, all the restaurants were crowded and we had to wait for a very long time to get a table.

After dinner, we went to a ranger’s program mentioned in this post. Then we drove to Stovepipe Wells village where we were staying for the night.

Early morning next day, we went to see Mesquite Sand dunes before the sun rose. These sand dunes are a good place to watch sunrise. We had to climb these tall steep sand dunes to witness the sunrise. It was very tiring to climb these dunes. This was the first time in my life that I saw sand dunes, so I was kind of excited. I realized that the sand was pretty hard under my feet. I had always imagined they would be soft like the sand that we see on beaches.The sunrise was very beautiful. Carry water with you if you are planning on climbing these dunes.

The eroded canyons and washes provide plenty of sand, the wind seems to always blow (especially in the springtime), but there are only a few areas in the park where the sand is “trapped” by geographic features such as mountains. Source: Link 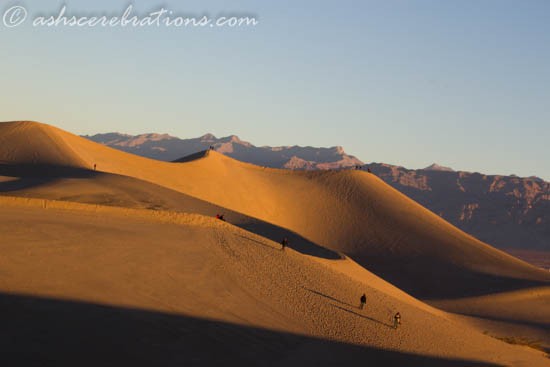 Then we headed back to the village and had our breakfast. Breakfast at Stovepipe wells was not that good. Even the rooms were not as good as the ones we had at Furnace creek. The rooms were cheaper though and that was the reason we saw too many Indians in this resort.

After breakfast, we drove to Ubehebe crater. It is very deep and wide. We saw people hike down to the base of the crater. We even saw some people running on the steep sides of the crater.

Ubehebe Crater is a large volcanic crater 600 feet deep and half a mile across. Known as maar volcanoes, created by steam and gas explosions when hot magma rising up from the depths reached ground water. The intense heat flashed the water into steam which expanded until the pressure was released as a tremendous explosion. Source: Link

Instead of hiking down, we were contemplating on visiting “Race track playa“. We were also not very interested in visiting “Scotty’s castle“, which is very close to the crater. 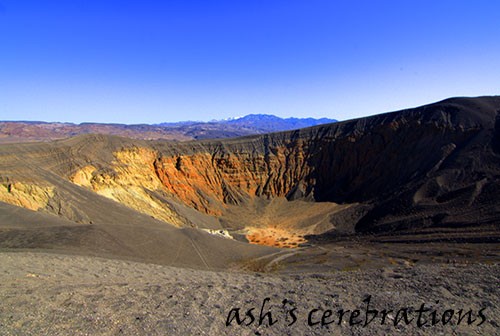 Previous day, when we inquired at the visitor center, we were told that the road was covered with snow. And also even if we drove, the lake on which these rocks create tracks was covered with snow and water. The lady at the center also warned us that one of our tires might get punctured. But we were still interested. We saw couple of SUVs leaving the crater to go to Race track playa. The Racetrack road starts right next to the crater. We decided on an impulse that we will follow those cars.

The Racetrack is a playa–a dry lakebed–best known for it’s strange moving rocks. Although no one has actually seen the rocks move, the long meandering tracks left behind in the mud surface of the playa attest to their activity. Source: Link

The road is really terrible. It was okay for first few miles. But the condition of the road was really horrible once we crossed few miles. One of the stretches made us regret our decision of coming on this road. Nobody, not even a single website mentioned that the road condition was this bad. People said that we needed a 4 wheel drive (high clearance vehicles) and that it was an unpaved road. The drive was slippery too, because of all the snow that had fallen. Very carefully we drove on that road for nearly 2-3 hours. Distance was not much (just 20 miles) but we had to drive very slowly because of the road conditions.

The drive was very scenic. Snow covered mountains on either side, with Joshua trees. After some time, we were glad that we took this drive since it was worth all the effort.

When we crossed this Teakettle junction, we were relieved that the destination was not far. As we stood near this point, we saw a family come and tie a kettle to this pole.

At the junction where the unimproved road from Ubehebe Crater meets roads to the Racetrack Playa and Hunter Mountain, there is a sign reading “Teakettle Junction,” with many teakettles that visitors have attached to it, with messages written on them. Link: Wikipedia

And then we finally came to the point where you can see rocks move. We saw some rocks on the snow with a trail on the snow. But we did not see the real “Race track playa”. I think you can only see them in summer when it is really hot. I am pretty sure we cannot make this journey in summer when the temperature is like 120 degrees, so I am happy with whatever we saw. In summer, the tires would no doubt give up because of the heat and the road conditions. We saw a truck being towed on the way, because it broke down. We were pretty scared thinking about what would happen to us if our car broke down. We had no cell phone signal and we were really far from civilization. Also there were hardly any cars visiting this place (maybe 3-4 cars in front of us).

Thankfully, our car did not give us any problems on the way back as well. It was a brand new car (less than 5K miles) that we had rented and that kind of helped. But something went wrong with the wheel alignment probably because the car started wobbling. We did not realize this when we drove back to Furnace Creek resort where we were staying this night. When we drove back the next day, we came to know that something was definitely wrong with the car. We just had snacks for lunch so we were starving by the time we went to the restaurant.

Something went wrong with my tummy too after this gravel road drive. I could not digest my dinner (vomited my dinner) and we were both way too tired. After dinner, we decided we will go to Zabriskie point to see some stars. On the way back, I visited the general store and bought some souvenirs.

Other posts on Death Valley: