We made a 4 day trip to Death Valley National Park last year. We saw snow capped mountains, snow lying on the ground, salt deposits, sand dunes, Joshua trees, lakes, canyons – such diversity in landscape that we were in awe of its natural beauty.

First day, we drove to Death Valley via Sequoia National Park (freeway 178). This route was pretty scenic, especially when we crossed Walker Pass. We took a small detour and entered Lone Pine city to catch a glimpse of the tallest mountain in California – Mt. Whitney. There were many peaks in Sierra Nevada mountain range and it was difficult to spot Mt. Whitney among them. We went to a gift shop and inquired, upon which the person at the counter pointed us to the right peak. Lone Pine peak looks taller as it is closer.

After that, we headed towards Death Valley and by the time we reached our hotel, it was dark. I gave star trails a shot from our hotel.

Second day, we got up early and saw sunrise at Zabriskie point. It was definitely one of the best sunrises I have ever seen. If you are serious about photography, you should try taking the sunrise photos at this point.

We then came back to hotel, had breakfast and then started towards Badwater Road. We did a mistake by not carrying anything for lunch. There was nothing available to eat and we ended up spending the whole day there. So we did not have our lunch and instead had an early dinner.

We drove along Badwater road till the end of the valley. The drive was very beautiful. On one side you see canyons of various shapes, colors and patterns, while on the other side you see salt deposits. Copper canyon was one of the best ones. I was on the lookout for roadrunner, but instead we ended up seeing  Coyotes, not one but 3-4 of them. Two of them came in front of our car and then one of them came and stood next to my car door. I was really scared. If you are driving on Badwater road, be very careful. We also saw Telescope peak, which is the highest point in Death Valley. 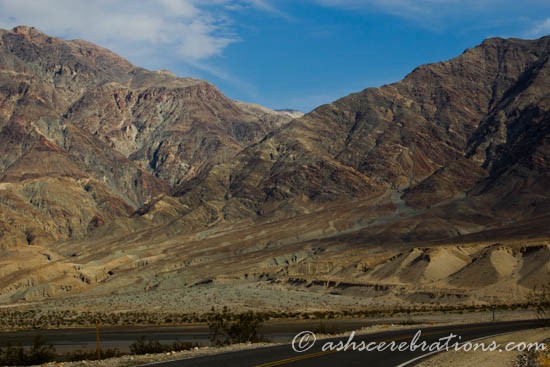 We took a closer look at the salt deposits at the Badwater Basin. It is the lowest (282 ft (86 m) below sea level) and driest place in North America. It is also supposed to be the hottest place on Earth since the highest temperature was recorded here. The valley is surrounded by very tall mountains on all 4 sides and as a result, it hardly rains here. Air gets heated and rises up but it cannot escape because of the mountains so it comes down and heats the valley again. Seeing and touching the salt crystals was the best part of the trip. If you ever visit Death Valley, do not miss this place. If you look closely at the mountain in front of the parking lot, you can see “Sea level” marked on it.

We then headed towards the Natural Bridge. It is a dirt road and a 4-wheel drive would be better. Even with our 4-wheel drive, we found it little difficult to drive. We hiked for about 1/2 a mile to see the bridge which was naturally formed. It is a very easy hike. I put the photo in an earlier post.

And then we walked on Devil’s golf course. It is a large salt pan with crystals that look like rocks. Walking on these was little difficult as they were very sharp. But they are really amazing and unique. They are the remnants of Death Valley’s last lake.

On a warm day you may hear a metallic cracking sound as the salt pinnacles expand and contract. The Death Valley saltpan is one of the largest protected saltpans in North America. Salt continues to be deposited by recurring floods that occasionally submerge the lowest parts of the valley floor. Source: Link

We wanted to cover Golden Canyon on the way back but it was already getting dark. We decided we would cover it the next day and headed towards Artists drive which was supposedly a good place to watch sunset.

Other posts on Death Valley: