Next day, we woke up early and went down for breakfast. Breakfast started at 5:30 AM at our hotel, which was a good thing. We ordered Alaskan sourdough pancakes. I had done some research beforehand that sourdough pancakes are a specialty of Alaska. I did not like them that much, but husband liked them. He even had them next day morning for breakfast. I found them very sour and not that great with maple syrup which was sweet. While at the breakfast, we saw only older people. We did not see a single young person in the hotel. Later on, we realized that most of them had come through some or the other cruise. So that made us wonder if only older people took cruises?!

Anyway, we had our car valet parked and once we got the car, we headed towards Seward. We were warned that it would rain and even the weather prediction showed rain. I was already disappointed. But thankfully, it did not rain at all. Lucky for us! 🙂

Our plan for day 2 was to drive to Seward and then take a glacier cruise of about 6 hours to Kenai Fjords National Park. The drive to Seward was really beautiful. Sun was just rising so we got some pretty vistas as it rose behind the mountains. We had to stop multiple times on the way to take pictures. 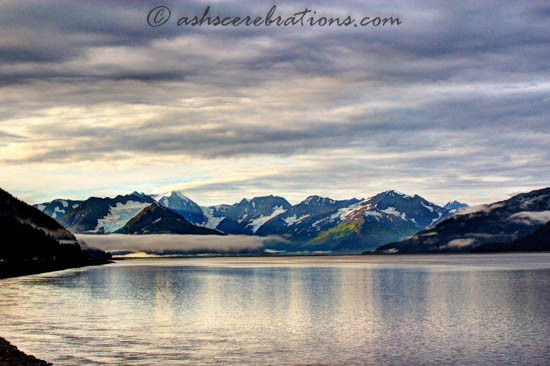 Once we reached Seward, we went to the visitor center which was closed. We went to  nearby Safeway and got ourselves some sandwiches, water bottles etc for the tour. It was a good decision on our part to carry our own lunch, since the lunch provided on the cruise was bad. We went to the parking lot and parked our car. There was a shuttle which took us to the tour office where we had to collect our boarding and meal passes. After that, we headed to the boat. The upper deck was already full so we had to settle for a table in the lower deck. Another couple joined us in our table. The view was amazing as we passed mountains, glaciers, Gulf of Alaska and Pacific ocean. It was too windy and cold outside. I could not stand for even minutes without having a frostbite. Unless you hold the railings, you will definitely get blown away by the wind. But still somehow I managed to click some pics. They had hot beverages inside the boat which helped a lot.

On the way, we saw sea lions on one of the rocks. We also saw plenty of puffins happily moving around on the water surface. They are very pretty and so tiny. I never even imagined that they would be so tiny. We headed to Aliaik glacier for a closer look. For the first time in my life, I saw a glacier this close. We saw icebergs floating on the water. Reminded me of Titanic even though they were not that big. 🙂

What was interesting was knowing that glaciers are blue in color since rest of the colors are absorbed. That is because glaciers have high density since they are ice which has been compressed over many years. We saw big chunks of ice breaking from the glacier and falling into the water, as you can see in the below picture. This process is called Ice/glacier/iceberg calving and you hear loud cracking or booming sound, somewhat like a thunder when the ice breaks or gets some cracks. The ice that breaks away is called an iceberg.

We saw many otters near the glacier. 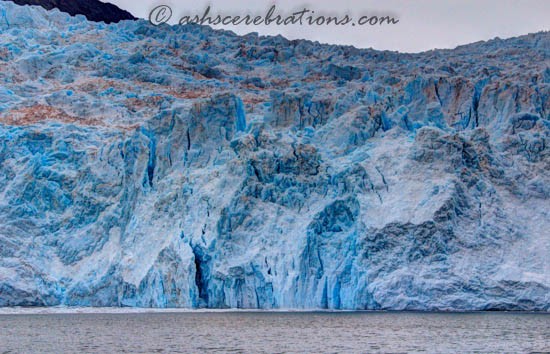 We were standing outside the whole time and that cost us our seats. On the way back from glacier, we were kind of seat-less and hence we moved to the upper deck. This time we sat outside and that gave us lot of opportunities to spot whales. Even though it was freezing cold, I am happy that we sat outside. We saw porpoises, humpback whales and some Orcas (killer whales). When we went for whale watching last time, we hardly saw any whales. Even when we spotted them, they were so far away from our boat. But in Alaska, it was a totally different experience. The waters here are abundant with sea life and the boat had some sort of tracking mechanism through which he could spot them and was able to take us closer to these animals. We saw couple of humpbacks playing closeby and one of them exhibited lobtailing  multiple times by slapping its fins (flippers) against the water. It was a very interesting sight.

Found this on Wikipedia: Some suggest that lobtailing in humpback whales is a means of foraging. The hypothesis is that the loud noise causes fish to become frightened, thus tightening their school together, making it easier for the humpback to feed on them.

Some of the whale behaviors that we have seen so far ( Source: link):

We also saw plenty of birds like puffins and gulls on couple of cliffs. Unfortunately, our bags were in the lower deck so I did not have my long lens to take closer photos of the birds and other wildlife that we spotted. So I got some lousy pictures on the way back. But I am not really complaining since I was able to enjoy without bothering to concentrate on taking good pictures.

As we approached the dock, the Captain let us take a look at the gadgets and equipment on the boat. It was interesting to see so many advanced devices.

Once the cruise was over, we headed to Exit glacier. It is the only glacier which is accessible by road. You need to hike for less than a mile in order to get a view of the glacier. One can also hike to the glacier itself. But we did not have enough time, since it was already getting dark and the hike was very long for about 7-8 miles. So we gave up in the middle and came back to the car.

We drove back to Anchorage and by the time we reached our hotel, it was pretty late. Had something for dinner at the restaurant in our hotel. We both are usually not so fussy about food. We can survive on sandwiches for an entire day and that helps us save time. We don’t usually go searching for a good restaurant and eat whatever is available wherever we go. One of my friends has to always go searching for an Indian restaurant everywhere he goes, since he wife eats only Indian food. So yeah we saved a lot of time and utilized the entire day without wasting much time.

Taking a longer cruise might be better if we want to see more glaciers. Some people get seasick but husband and I were okay. We did not get sick so a longer cruise gets added to my wishlist 🙂

Other posts on Alaska:

#wyrdandwonder Day 2: pop this in your book bag
#wyrdandwonder Day 1: we're off on an adventure. Here's my TBR. Currently reading The Song of Achilles.
A weekend spent in snowball fights, lying on the snow and digging buried pinecone. After a year of quarantine, finally some deserved break. Happy after a long time. #kidsofinstagram #snow #vacation #fun #snowday #playinginthesnow #playingwithkids #snowfight #familyiseverything #familyfun
Currently reading and painting trees from the book. My love for painting is back and hopefully this time I will continue painting without taking a break. Quotes and trees from the book.
#wyrdandwonder TBR for May #quarantinelife #fantasy #books #tbr #bookstagram #book #booklover #instabook #instabooks #bookaholic #bookish
One of the best graphic novels I have ever read. Almost as good as Maus. #graphicnovels #currentlyreading #bookstagram #books #book #bookworm #history #instabooks #bookish #booknerd #bookstagrammer #booknerd #comics #japanese #borrowedfromlibrary #wwii #worldwar2