I recently finished “The book thief” since the movie is coming out in November this year. I was not very much impressed with the book.

I know it is a very tragic topic but I read about holocaust only because I want to learn more about the history behind it. I hated history when I was in school but not anymore. Now it is one of my favourite topics.

For those who are not sure what I am talking about, check the wiki link. “Of the nine million Jews who had resided in Europe before the Holocaust, approximately two-thirds were killed”.

My review of “The book thief“:

It was a good book. This book showed a different perspective – that not all Germans admired Hitler and that not all Germans hated Jews. The writing was brilliant. But still it fell short somewhere. For some unknown reasons, I was not very impressed. Probably it was the execution. The pace was too slow for a person like me.

Quote: The Germans in basement were pitiable, surely, but at least they had a chance. That basement was not a washroom. They were not sent there for a shower. For those people, life was still achievable.

The other books that are based on Holocaust – “The diary of a young girl“. I first heard about this book when it was part of our English textbook in school. Anne Frank and her family were in hiding and her diary was published later as a book.

Quote: “There are many who wait for death”

Maus was probably the best book I have read about the holocaust. It won Pulitzer prize for non-fiction. My review of the book is here. Maus gave me nightmares, reading how badly people were treated for no fault of theirs. If you really want to know what happened, read Maus. A couple who were actually put into concentration camp narrate the story as witnessed by them. You could not get a more authentic recount of the horror. 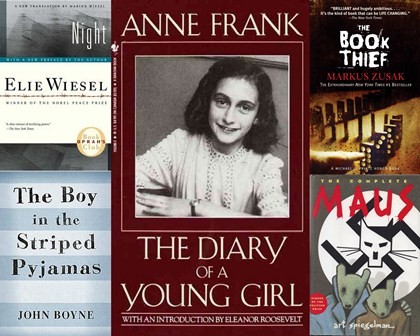 I own the book “Night” by Elie Wiesel, which again gives a first hand account of the atrocities to Jews. I plan to read the book soon. I also want to read “The boy in the striped pyjamas“. I have heard many good reviews about the book.

There are some great movies which show the holocaust, gas chamber and the tortures that Jews underwent during those days. Schindler’s list which I already reviewed here, Life is beautiful and The Pianist are few of the movies that I have watched on this topic. All the three movies were heart touching and tear jerking. If you are weak of heart, then I would suggest you to skip Schindler’s list. Life is beautiful is probably one of the best movies I have ever seen. It is simply brilliant and it is about a family which ends up in a concentration camp. The Pianist is about a man’s struggle to survive, owing to the fact that he is a Jew. All of them are based on true stories. The Pianist and Schindler’s list were based on books with the same name.

Are there any other good books or movies on Holocaust that you have read or seen? Let me know in the comments.

Amon Goeth: Today is history. Today will be remembered. Years from now the young will ask with wonder about this day. Today is history and you are part of it. Six hundred years ago when elsewhere they were footing the blame for the Black Death, Casimir the Great – so called – told the Jews they could come to Krakow. They came. They trundled their belongings into the city. They settled. They took hold. They prospered in business, science, education, the arts. With nothing they came and with nothing they flourished. For six centuries there has been a Jewish Krakow. By this evening those six centuries will be a rumor. They never happened. Today is history.

Quote from Life is beautiful:

Giosué Orefice: “No Jews or Dogs Allowed.” Why do all the shops say, “No Jews Allowed”?
Guido: Oh, that. “Not Allowed” signs are the latest trend! The other day, I was in a shop with my friend the kangaroo, but their sign said, “No Kangaroos Allowed,” and I said to my friend, “Well, what can I do? They don’t allow kangaroos.”
Giosué Orefice: Why doesn’t our shop have a “Not Allowed” sign?
Guido: Well, tomorrow, we’ll put one up. We won’t let in anything we don’t like. What don’t you like?
Giosué Orefice: Spiders.
Guido: Good. I don’t like Visigoths. Tomorrow, we’ll get sign: “No Spiders or Visigoths Allowed.”

Oh by the way, I am now among the top 1% of reviewers on Goodreads. I got this email in July, but I am posting it now on the blog.

8 thoughts on “Books and movies about Holocaust”