This trip was pending from a long time. I did all the research and made the bookings. I sometimes wonder if I should open a travel agency or something, since I do end up doing so much of research about every single place that we visit :P. I want to cover everything that is there to see and do so much of searching and reading up on hotels and tours. This time I took a book and read history about Hawaiians and the islands before going. It was a successful trip, but we did not have time to cover almost 50% of the places that I wanted to see from my list. Anyway, we did cover some of the important things we wanted to see so I am not all that disappointed.

We visited Big Island, which is the biggest island in Hawaii and trust me when I say, it is really BIG! The whole point of going to this island was to see lava flowing from one of the most active volcanoes on this planet. I am not sure if there is any other place where we can see lava flowing right in front of our eyes and with this much ease. The highlight of the trip was lava flow. Though there were other things to see and do in Hawaii, volcano was the most interesting thing on that island. I so badly want to see that lava flow again in my life 😀 The only thing that I did not like about Hawaii was the humid weather. Reminded me of my visits to Chennai where I would end up sweating buckets within minutes of going outside. It was not as bad as it is in Chennai, but still I do not like humid weather.

We took the early morning flight and thankfully, since Hawaii is 3 hrs behind Pacific time, we were there by 10 in the morning. We rented a convertible car which was something that I wanted to drive from a long time. It was sunny but the breeze was so nice that taking a convertible was a good idea. The first agenda for day 1 was to cover some historical places.

When I read the history of Hawaii, I realized that I hardly knew anything about these volcanic islands. There were no native people in Hawaii. The Hawaiians that you find there are Polynesians, who migrated from New Zealand, Tahiti etc islands. These people seem to have come sailing and after finding abundant sea life here, must have settled down in Hawaii. King Kamehameha was probably the greatest king who united all the Hawaiian Islands. But Hawaiians practiced human sacrifices to appease their God of fire, Pele. There are many temples (called Heiau) which were places of human sacrifice. We visited one such temple – Ahu’ena Heiau.

We also visited the Place of Refuge – Pu’uhonua o Honaunah. The history of this place goes like this – In those days, any bad conduct by a person never went unpunished. If the folly was very big, the entire family would be punished for that. This applied for enemies who belonged to a different tribe too. If suppose you have been say sentenced to death and you somehow escape from punishers and enter this temple, then you are kind of saved. Hence this place was called place of refuge. You are given a map and you can take a self-guided tour of this place. There is a wall which demarcates the beginning of royal grounds. Most part of this is in ruins, except for the temple. This is one place that you would not want to miss at any cost.

Captain James Cook landed on Hawaii and was the first European to have made contact with Hawaii. I read his story and it was very interesting. Read more about him in Wiki here.

There were plenty of other places that I wanted to pay a visit, but we did not have enough time to cover everything. Maybe some other time. 😦

Benedict’s Catholic church came highly recommended in many travel sites and in the travel guide that I had. It is very small and the paintings were not as great as we were told they would be. It is on the way to the place of refuge, but we visited it while coming back from place to refuge.

We were supposed to see dolphins here but did not see a single dolphin. Waves were hitting the shore with such force that we properly got wet after standing near the bay for few minutes. It was drizzling too. There is a temple called Hiki-au Heiau next to this bay, where human sacrifices were made. Wonder why most of the native people – Incas, Mayans, Aztecs, Polynesians – all of them resorted to human sacrifices so much. 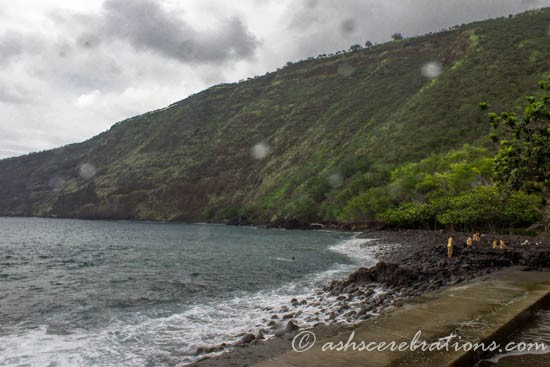 Kona side of Big Island is famous for coffee farms. Kona coffee is supposed to be the second best coffee in the world, next only to Jamaican coffee. Napoopoo road is full of coffee farms. We headed to Greenwell farms, where they let us taste all the coffee flavours that they sell and also gave us a free tour of their farms. I learnt a lot about growing and processing coffee, which I did not know earlier. I had read somewhere that the more you roast coffee, the less caffeine it contains. The tour guide denied this saying some person actually did these experiments and confirmed that caffeine has nothing to do with the amount of roasting. Coffee needs lot of rain and also here you do not get direct sunlight because of the mountains so Kona is an ideal place to grow coffee. I also learnt that as the coffee tree grows older, the taste starts deteriorating. The coffee beans are selected and usually the whole beans end up becoming the best coffee brands. The coffee beans plucked from the tree are kept in the sun so that they become dry and then they are roasted and exported. The shelf life of these beans are supposed to be less than 24 hrs after which they get spoilt, if not roasted/dried. People from small farms bring their beans to Greenwell or other big farms for processing. Starbucks and other major coffee chains do not actually grow any coffee it seems. They just buy beans from huge farms like Greenwell and then sell them after adding their own flavors to it. We heard that Seattle’s best coffee has a Kona brand, while Starbucks does not. It started raining even before we started the tour. We heard that it rains all the time, throughout the year. After buying loads of grounded coffee, we left the farm. 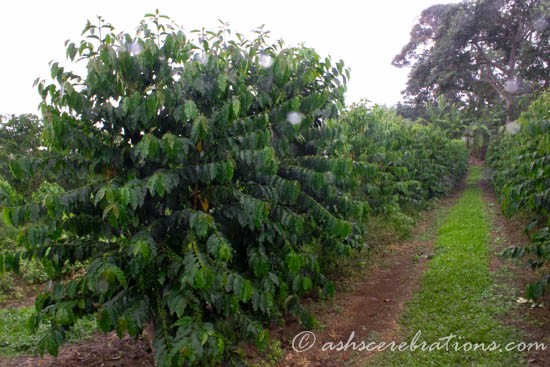 To be continued… I am writing this travelogue as a series. Please come back for the next part.

Other posts on Hawaii:

A weekend spent in snowball fights, lying on the snow and digging buried pinecone. After a year of quarantine, finally some deserved break. Happy after a long time. #kidsofinstagram #snow #vacation #fun #snowday #playinginthesnow #playingwithkids #snowfight #familyiseverything #familyfun
Currently reading and painting trees from the book. My love for painting is back and hopefully this time I will continue painting without taking a break. Quotes and trees from the book.
#wyrdandwonder TBR for May #quarantinelife #fantasy #books #tbr #bookstagram #book #booklover #instabook #instabooks #bookaholic #bookish
One of the best graphic novels I have ever read. Almost as good as Maus. #graphicnovels #currentlyreading #bookstagram #books #book #bookworm #history #instabooks #bookish #booknerd #bookstagrammer #booknerd #comics #japanese #borrowedfromlibrary #wwii #worldwar2
Tried my hand at making gnocchi for the first time. Turned out yummy 🤤❤️😋
Honey dukes chocolate + a good book 🥰🎆