My first book which was a travelogue. 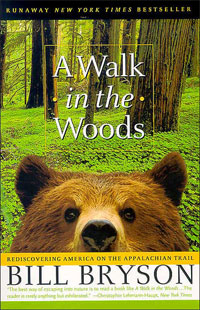 Interesting but also little monotonous and boring at places, because he dumped way too many facts. The facts were interesting but sometimes made me sleepy. It was good but not exactly “great”, the way I thought it would be. I have not seen any part of the Appalachian Trail, so in a way it was kind of exciting to read about it. Bryson was not able to complete the trail.

I have one complaint from books like these –“Why don’t they put any photos?”

I did not like Bryson’s egoistic attitude. He acted like a jerk in many circumstances and made an idiot out of Katz (which I did not quite like). Otherwise I liked the way he explained all the important mountains, terrains and dangers that lurk in AT. I also liked the facts that he brought out about park service’s negligence due to lack of funds, murders on AT, hunting, animals getting extinct and how trees were being mercilessly chopped/died. He mentioned about lot of animals and birds like Carolina Parakeet, Warblers, Catamount, Caribou about which I had never heard before in my life.
E.g: Mussel: which are supposed to be freshwater and saltwater mammals with shells. I have seen them but never knew the name.

Another interesting chapter was the one on the city which is on fire from last 40 yrs or so.

I did not know that bears liked snickers. I wonder if squirrels like them too. Recently, while trekking, a squirrel followed us when we were hogging on snickers. Out of curiousity, my hubby threw a snicker at it and it instantly started chewing it.

For a person who has never seen AT, this book was pretty informative. I also watched a documentary on AT where they showed everything that Bryson is talking about. Do watch this if you get a chance: “National Geographic: Appalachian Trail”. AT is full of greenery and extremely beautiful. It showed a 70 year old hiker who completed the entire trail and ended it at Katahdin in Maine. Maine is supposed to be the toughest part of AT. It is about 20% of the trail but requires 80% of the effort. It also spoke of the effects of acid rain on AT. I still wonder how thru-hikers hike through AT. 2,100 miles is not a joke. I cannot even hike for 2 miles without becoming breathless.

Some quotes from the book:

“Each time you haul yourself up to what you think must surely be the crest, you find that there is in fact more hill beyond, sloped at an angle that kept it from view before, and that beyond that slope there is another, and beyond that another and another, and beyond each of those more still, until it seems impossible that any hill could run on this long.”

I am now trying to find a book on “PACIFIC CREST TRAIL”.