Thanks to the enormous work pressure, I was in hibernation mode for couple of months. All these years in my life, I was so busy making my career, completing my studies that I hardly had time to sleep, forget about reading books. So I decided to make up for all those lost years by reading as many books as possible this year. All those books which were on my to-read list from ages are now being pushed to read list.

I have been reading blogs whenever I get time. But I was too lazy and also kind of busy to login and comment. Sometimes I have commented too. Hope to come back to regular routine of blogging soon.

I have decided to put reviews for 3 books that I read this year, which have now become one of my most favourite books ever. I would strongly recommend these books to everyone.

1. The Complete Maus by Art Spiegelman

Only comic book to have won a Pulitzer Prize. No wonder! It is a survivor’s tale about the holocaust and a true story (not fiction). A Jewish couple survive, while their entire family perishes. Father narrates the story to his son later, when he is on his deathbed. I knew little bit about how badly Jews were being treated in those camps, thanks to movies like Schindler’s list and Life is beautiful. But this book gives a first hand account of how horribly they were treated. Very disturbing and I felt so bad when I read about the way they were dumped in the trains, towards the end. What kept me going was my curiosity to know how they actually escaped, without getting killed. When the Americans finally arrive, I was so happy for the couple. At the same time, looking back at all those innocents who lost their lives for no reason at all, I feel like crying. It’s a great book and I would recommend this to everyone.

“I did have nightmares about S.S. Men coming into my class and dragging all us Jewish kids away.”

“it’s just that sometimes I would fantasise Zyklon B coming out of our shower instead of water.”

“I dunno.. Maybe EVERYONE has to feel guilty. EVERYONE! FOREVER!”

Jews are depicted as mice, Germans as Cats, French as toads, Americans as dogs and Pols as pigs in this comic.

This is one of those books that everyone has read and is spoken a lot about. One of the main things why I liked this book was that it was very thought provoking. I would say more than the story, I loved the way Orwell has tried to put across a nice social message. It was very disturbing, no doubt. At some point, I was really thinking whether I should skip the torture part. But I still continued because of the way it was written. I had hoped against all hopes that something good or miraculous might happen at the end. But the ending came in as a shock. The last line shook me completely.
This is about a government, much worse than any we have seen. Very scary and totally unimaginable. “Power is not a means, it is an end” being the motive. Sometimes while reading I forgot that this was fictitious because of the way in which he goes into details. He completely justifies why such a party came into existence or why they are the way they are. Even their slogans make lot of sense when you understand what they mean. I usually don’t like books which preach or talk about politics or society but this book really impressed me.
This is probably the most disturbing and depressing book I have read so far.

” War is peace, freedom is slavery, ignorance is strength”

“Nothing exists except through human consciousness”

“Stupidity was as necessary as intelligence, and as difficult to attain” 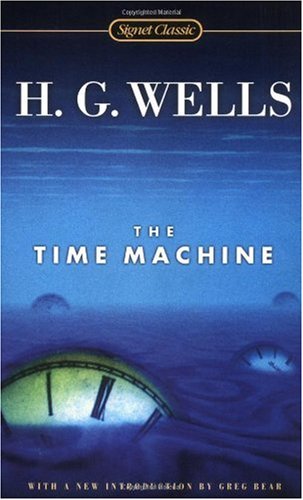 This book was published in 1895, so you can imagine the kind of technology and science advancements they had in those days. Yet this book can be read even today and the fun is not lost. I was initially planning to give this book 4 stars but the ending was what I liked the most about the book. A very realistic ending and the epilogue was great.

The term “Time machine” was coined by H.G.Wells and this is now universally used to refer to such a vehicle. What was more interesting to know was that, Wells has assumed time as the fourth dimension, even before probably scientists came up with those various theories. Time travel is something that has always fascinated me and that is one of the reasons why I read it.

Many books and movies have used the concept of time travel, but reading the first book where this concept was introduced is altogether a different experience. The way our future has been portrayed by Wells makes it a very interesting read. Indirectly, he tries to send a message across about the caste system and racism. It is a very small book and I would suggest anyone with a slightest bit of interest in sci-fi to read this book. I simply loved this book.

“Strength is the outcome of need; security sets a premium on feebleness.”