This is my entry to the Mystery Fiction ‘Whodunnit‘ contest organized by BlogAdda.
Tell us WHO killed Lila? How/Why? Post the answer on your blog, answering these questions in less than 400 words.

I had a fair idea of who it was…. Lila could be killed only if she wanted to be killed. She was smart and had escaped every time one of us had tried to kill her. Nobody in this house was capable of killing her. Moreover, nobody had any reason or motive what-so-ever to kill her, after these many years. She was anyway dying and this would quite possibly be the last time we would ever meet her. Sia killed her. Not because she wanted to kill her, but because Lila wanted Sia to kill her.

Lila was smart. (That was the clue hidden in the T&Cs.)  She invited all her ex-husbands who had attempted to murder her in the past for a party. Why did she invite us, after these many years and especially, when each of us had tried to murder her in various ways? She called us since she had a plan in mind. She wanted to make sure her ex-husbands were held responsible for a murder that they did not commit. When Sia went to meet her sister, Lila disclosed the plan she had hatched out to her sister. She made Sia prick her using the hood of the arm-band. The hood of the arm-band which was shaped like a snake definitely contained poison. Even though the twins never shared anything in life, Sia gave heed to her sister’s last request. Sia had been the last person to meet Lila. She knew that Lila would die in a few minutes and this was the reason why she had been weeping when she came out. Lila threw all the belongings that she had of her ex-husbands’ onto the floor. The scarf given by M, beads from R’s rosary which Sia had stolen and pieces of broken tea cup were put by Lila to draw suspicions on us. Lila came out to see everyone for the last time and was glad that she trapped her ex-husbands again. Nobody could beat her in smartness. As soon as the poison entered her blood stream, she felt weak and immediately went inside the room. After a few minutes, she died a peaceful death.

After finding all the items in her room which were related to our past attempts to murder her, the cops were convinced that M, R, G and I had killed Lila. Lila had succeeded.

This was a very nicely woven tale and I had plenty of fun participating in this contest.

This is the image of the object that I want to put from Pringoo: A tea cup 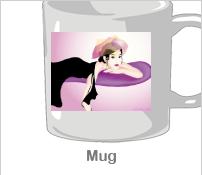