Rainy season it is and what do we do for timepass? Games 😀 Yeah I love games and all sorts of them. This week and last weekend just went in playing games. What games you ask eh? Check this:

I am totally addicted to it and have wasted lot of time playing games on it. Unlike other girls, who do not usually like games with blood and violence, I like games which are full of violence 🙂 I also like racing/role playing/shooting games. Even the games for children like UP interests me. I also like playing Super Mario Bros on Wii 🙂 Recently had a ball of a time playing video games. Also played Badminton after like 10+ years 🙂 I was good at it when I was in school and would play almost everyday. But had no time to play once I quit school. But last weekend I played it and realized that I was as good at it now as I was in school. It was not like I forgot how to play Badminton 🙂 Totally nostalgic the game was. Remembered the girl with whom I used to play doubles in school. My partner who had a lot of dreams about winning the school cup, but we lost against fellow classmates 😦

Bananagrams is a very interesting game. All scrabble lovers will love this game. But it is even more interesting than scrabble. I played a word game after a long time but won it 🙂 My dad got all kinds of weird letters like Q, Y, X and he refused to exchange them. He kept struggling to make a word out of such letters and I kept winning 🙂 Look at the words I made below. I proved that my vocabulary isnt that bad 🙂 I made all these crosswords myself.

I like word games a lot for some unknown reason. This is one game that I have been playing for ages and still like playing. It is real fun when I am all alone and just have a laptop handy. I like updating my vocabulary often 🙂 This game comes handy when I am bored of other TV games. I usually beat others in this game. 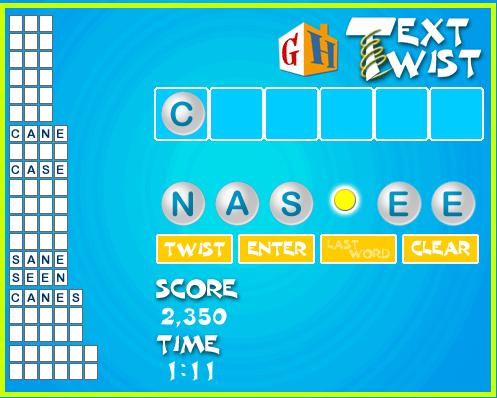 This is an ideal game to play when you have a hugeeee number of friends with you. The bigger the gang, the more fun it is to play. We used to play these with 1 cent coins initially. Now I have a poker chips set. I like this game because it is a very intelligent game and a clever person can easily trick others. It is not a mechanical dumb card game like some of them are. Playing it in Vegas for real money is even more fun 😉 But sadly losing money is not 😦 Roulette is also a very interesting game to play in Vegas. I want to go to Vegas again!! The sin city is a very good place to have fun!!!

My all-time most favorite game. I love strategy games a lot and this game tops the list. I also found out that I have a fascination for wars 😛 No wonder I loved Return of the king just for the war at the end. I love all those movies which involve war. I definitely was a king in my previous birth, I feel. I love taking my soldiers and attacking a neighbouring kingdom. What I dont like is seeing them getting killed mercilessly.

So I guess everyone got an idea that I am a game-freak 🙂 I felt like writing this when I had a chat with my colleague who had been to Vegas for the first time and another colleague who has never been there. I explained them the rules of Blackjack, Poker and Roulette in one go 🙂 They never expected to hear this from a girl I guess 😛 😀

I, for some unknown reason never got addicted to Farmville. I used to play the game in office, while drinking coffee, since I had no other game handy at that time. But with the increasing work pressure, I lost interest in it completely. Now I am totally out of Farmville. Initially, I kinda felt that it was little interesting. But later on it got boring.

I know lot of people who spend their entire day chatting. I can see them online at any time on any day. But I really find chatting to be boring too. I really am not a chat person. I despise chatting. I prefer having a telephonic or a face-to-face conversation with others. Sometimes I do chat if I need to catch up with someone whom I cannot call (like in a different country or something), but even that is rare.

More games planned for this weekend, since it will be a rainy weekend again. Have a nice weekend!