Yayyy!! Another sci-fi movie got released this year – District 9.. I had seen trailers of this movie but I thought it was just another sci-fi movie where aliens come, kill people, then we attack and destroy them – end of story.. There was not much hype for this movie and I had no plans of watching it when my friend said “lets watch some movie”.. Then I opened IMDB and saw that this movie had 9/10 rating 😮 9 is like excellent, hardly any movie gets 9.. so there we were buying tickets for District 9.. 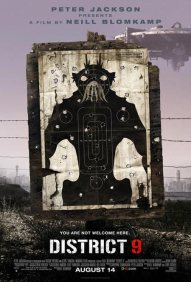 I can say that District 9 is one of the best sci-fi movies of all times and I really mean it!!  The plot is so different, the story is so beautiful.. I wont be revealing too much of the story.. Let me compare this movie with Independence Day kind-of movies.. My favourite alien movie so far has been Independence Day and I can say that this movie is better than Independence Day… We have always seen aliens as bad creatures who will someday attack Earth, destroy humankind, want to take over Earth.. This movie tries to address the question: What will happen if a group of aliens land on Earth? What will we humans do?

Have we ever given a thought about innocent aliens? who just happen to land onto Earth without meaning to?  How would humans treat those creatures? How badly we might treat them, just because they dont belong to this planet? This movie shows exactly the opposite of what Independence Day showed!!! We humans become so inhumane sometimes.. We fight against each other for land and food even though we belong to the same planet.. there is so much of racism.. “My religion, my country, my language”! why should we say that? Dont we share the same air, water and planet?

Imagine what will happen if someone from a different planet lands here and wants to share our food and land!!

Humans abuse aliens calling them “Prawns”, they are made to live in slums, given rotten food in exchange for sophisticated weapons, torn apart to conduct “lab” experiments, used as targets for shooting practices.. Even though it is a solid action film, we see lot of emotional drama in it, both exciting and thought provoking. 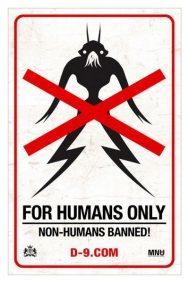 And in this movie, you feel like supporting the aliens, you want them to win their battle against humans.. Because, humans are the villains and they are so evil.. The story has that freshness which we havent seen in movies from quite sometime.. A new director and writer means fresh content in the movie.. The aliens look  so much more civilized and harmless when compared to humans, even though they are more powerful and technically advanced..

The ending was meaningful and not forced. But the story did not end, which means we have a sequel to it and I just cant wait to watch the second part of this.. This year we had another great sci-fi movie – Star Trek but even though you enjoy watching such movies, you dont actually believe in it.. But this movie was different. It did not have unnecessary special effects or action or unnecessary scenes.

And also the hero (Sharlto Copley) is not some superhero with powers or muscled body.. He is just an ordinary civilian who because of the circumstances does what he must do to help himself.. He is really funny in the beginning but later on, his role gets really serious.. He has acted really well. Do not miss this movie.. It is one of the best movies of 2009 for sure.

Some of the all time best sci-fi movies are:

24 thoughts on “District 9 of non-humans”