As a HP freak, I was eagerly waiting for the release of the seventh part of the Harry Potter series.. I and my friend B had booked for it 2-3 months back itself at Borders… We had spent half a day checking the sites for deals.. Amazon was giving a very nice offer – discount+ free shipping of the book and a guarantee that the book will reach on the same day (21st July 2007) or else the money will be returned back to the customer.. They had a tie-up with the United States Postal Service.. We were not sure if we would get the book from Borders on the same day.. The amazon deal looked tempting.. But later we read that Borders will be conducting a release function and we can collect the book on the midnight of 20th July itself.. I kept hearing rumors and read a lot of them at mugglenet and other sites.. One of the rumors was that voldemort was lily’s father or the worse one was that he was harry’s father.. I was waiting for the book desperately…

Then the day finally arrived..We had to collect a wristband which had our number in the queue for the night.. After calling B many times, B came and we went to the shop.. We were quite late..My number was 65 and B’s was 66.. I just couldnt wait till midnight.. Wish saying Accio Deathly Hallows would bring the book to my hand 😛 The function started at night 8.. The first event was fortune telling..though it was very silly and just for kids, I still went and made her tell my fortune.. She said that someone’s gonna give me a very nice gift.. lets see who that person is going to be 😉 Then they were doing face painting for free.. A woman was standing with two of her kids.. One of them got golden snitch drawn on the face and the other started refusing for everything and finally agreed to get hedwig drawn… I got Harry’s scar painted on my forehead 😀 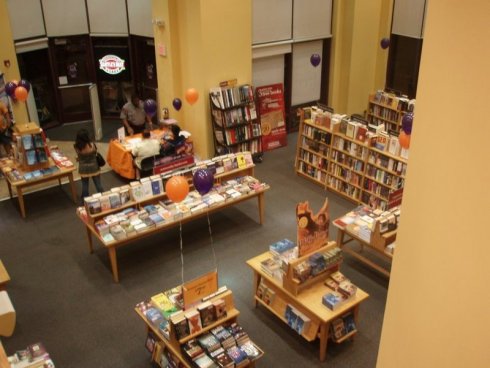 Then there were hats which you could make and I made myself a wizard hat..B kept pulling my leg saying “r u a small kid” but you should become kids sometimes..that’s when you really enjoy life.. 😀 We sat down in the stage after grabbing a book to read and were wondering where to get the wands from when we saw a kid holding a wand.. The boy said that it was near the counter..I pulled B and went there but couldnt find the wands.. The counter fellow said “it’s there” but we couldnt find them anywhere.. B wanted to drop the idea of wand but I had to get my wand 😦 Then we went to the information counter and enquired upon which a lady started searching.. But still she could not find them.. We lost patience and B suggested that we drink coffee.. We got coffees and while we were coming out, that lady had found the wands.. I took a wand and sat down drinking coffee happily.. It was nice to see so many people dressed like witches and wizards.. Especially, the staff had adorned pink hair and robes.. The perfect HP atmosphere!! We felt as if we were transported to the magic world.. Surprisingly, we were the only Indians who attended the function :O

Spelling bee was a game wherein you need to spell the word given to you correctly.. It was fun to see how people would find it difficult to spell some words.. Suddenly B shouted “this is not fair..you are asking difficult words to kids and easy ones to elders”..he had a point! A small girl was being asked very difficult words but she had managed to answer them correctly.. Finally there was a tie between two girls..both of them were spelling the words wrongly.. finally one of them managed to answer correctly and won.. She got No.2 position in the queue.. B asked her if he could take her old wristband since her number was 29 or something upon which she refused..Then they gave some freebies like notepads, pens with Harry Potter pictures on them..

Then a costume competition was held.. Kids had dressed themselves so cutely…it was fun to watch and see prizes being given.. A lucky draw was also held.. We both missed the prize by just the last 1 digit.. Once it was all over, we went and stood in the queue according to the band color and our line number.. At sharp 12, they started issuing the books and we got the book along with a poster.. I had ordered for the deluxe edition and the person at the counter exclaimed looking at the cover “wow!”..very few ppl had ordered for deluxe edition..probably just 5-6.. We grabbed another poster at the exit and left…We were so excited.. B wanted to open the book while walking down the street but then got scared that someone will mug us and take away the book.. He boldly opened saying “I will tell them that she has deluxe edition so take that, even if someone tries to mug me” but again kept it inside.. We got the bus as soon as we crossed the street, probably the last bus.. Inside the bus, B opened the poster and then the book and we had a look at the chapter names.. We both were soo excited 😀 We rushed home and opened the book and started reading.. We kept calling each other to know how much the other person had read.. It was absolute fun!!! I collected the book on friday midnight and finished it at around 7 sunday night.. But B finished the book before I did…It was even more nice to enjoy reading it with another HP freak 🙂