I went on a two day trip to Coorg..

First day: The first place we visited was the tibetian golden temple of Buddha..The statues were really huge..The temple was full of buddhist monks praying and chanting some verses..It seems it’s the India’s biggest tibetan monastery.. This comprises of two universities and two monasteries and is inhabited by Tibetian Monks.. This is situated near kushalnagar, 30 Kms from Madikeri and better known as “Byle Kuppe”. 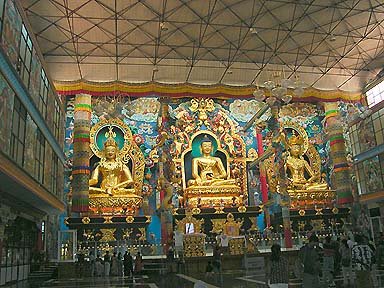 After that we went to the Nisargadhama..Situated at a distance of 2 kms from Kushalnagar on the Mysore-Madikeri Road, this picnic spot was established in 1988. This is a man-made island with an area of 65 acres.. The entrance to this spot is through a hanging bridge…Deer park, elephant riding, monkeys, swings, boating, cottages and bamboo trees all around – it was full of greenery.. Machans (tree top shelters) and Pargola (wall less shelters) are found here. 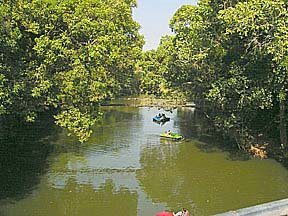 Then we visited the abbi falls.. This beautiful waterfall is situated at a distance of 5 km from Madikeri in a private coffee estate.. Abbi in Kodava dialect means “falls”.. The roar of the falls can be heard from the main road, from where a path goes through lovely coffee and cardamom plantations right up to them.. The chirping of innumerable birds which are easier heard than seen, fill the air with sweet music…path was very steep and difficult..since it was summer, the water level was less and also the falls was very thin.. but still the water level near the falls was upto the neck.. after playing for a long time in the water, we left the place..There was a bridge standing upon which you can get a nice view and also one has to cross the bridge in order to reach the falls.. Heard that during the rainy season, one cannot stand on the bridge because of the wind..I guess it will be very slippery also..

After we reached Madikeri, we saw raja seat..Kings of Kodagu spent their evenings there watching the sun set..It seems one can see the mountain ranges towering over one another all the way to the horizon..Heard that it also offers a thrilling panoramic view of flowing valleys..This notable spot at Madikeri is just 1 km from the Bus Stand…

Second day: Firstly, we visited Talacauvery, the birth place of river cauvery..it’s on a very steep mountain..the view was too good.. we could see the mountain range and the valleys, houses..then we saw the cauvery birth place..heard that the water level always remains constant irrespective of the season and weather..There was a linga also..There were steps leading to Bramhagiri Hills, which is at a height of 300 ft. from where, Kudremukh, Chamundi Hills, Wynad and Nilgiris are visible… we were very much tired by the time we reached the top.. we took some snaps and left.. the scenery was too good..

The river Cauvery begins at Talacauvery as a small perennial spring, but flows underground again to emerge a short distance away. It is situated at a height of 4187 feet (1,276 m).

On Tulasankramana day(October 17) thousands of pilgrims flock to the river’s birthplace to witness the miraculous rise of the fountainhead, when water gushes up from the spring at a predetermined moment.

Next we visited Bhagamandala..also known as Bhagundeshwara Kshetra, is a temple town located 39 km from Madikeri.. The Bhagamandala Temple, a blend of Malayalee and Nepali architecture with multi-layered roofs, is worth-seeing.. There are also other three temples, which are dedicated to Lord Ganapathy, Subramanya and Vishnu.. It is the meeting place of Cauvery river with its tributaries, Kannika and Sujyoti. This is popularly known as Triveni Sangama..The final destination was Nagarhole, a very huge forest.. I heard there are only 3 wildlife sancturies in Karnataka..

After having seen Nagarhole, I can boast that I have seen all the sancturies in Karnataka..

We saw many spotted dear on the way to the national park.. Then we went in the safari hoping to see many more animals.. Surprisingly, the door and the windows of the van were wide open… we again spotted many deers..then as we approached a lake, we saw 3 tigers.. all of us were so happy to see tigers in their natural habitat..even the driver was very glad about it.. he said that a gang of people visited the forest daily for 20 days with a hope to see atleast one tiger and still couldnt make it but we were so lucky that we were able to see 3 of them so easily..they were sitting next to the lake wagging their tails.. I guessed them to be female tigers who had just finished having their lunch 😉 dont ask me why.. Then all of a sudden, one of them started coming towards the van and the other tiger turned its head towards the van.. probably they can smell human flesh easily.. as soon as that happened, the driver asked me whether he can start the vehicle (since I was the only one who was completely immersed in taking the snaps) then we started the van and left the place..after that nothing exciting happened other than spotting more and more deer and also we happened to see some bisons..after a while, we saw some elephants.. 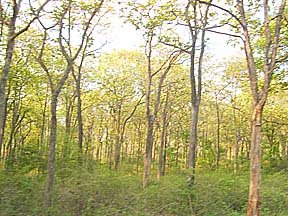 The Nagarhole Wildlife Sanctuary covers an area of 284 sq.km. with tropical and deciduous forests and belts of swampy ground at the head of small streams. The place derives its name from the winding river – Nagarhole meaning “snake river” – which flows through the park. The 640 sq km of gently undulating terrain at the foothills of the Brahmagiri hills is covered with thick tropical forest, grassy swamps and numerous rivers and streams.

Situated within the Koodogu (Coorg) and Mysore districts of Karnataka, the sanctuary borders the Kerala State. The largest river draining the area in the south is the Kabini, which was dammed in 1974. Other important rivers include Lakshmana, Teentha and Nagarhole. There are several perennial and seasonal streams and tanks, all of which drain into the four major rivers.

The Park mainly consists of moist deciduous forest in the northern and western parts and dry deciduous forest in the south-eastern part. A unique feature of these forests is the open grassy swamps, locally called hadlus, where the grass is lush all year-round. The swamps are numerous due to the high rainfall. Plantations of teak and species of eucalyptus cover much of the park.

The rich lush green bamboo, succulent grass and other shrubs offer ideal conditions for the elephant population. Apart from the elephants, the principal wildlife is the tiger, panther, chital, sambar, and sloth bear. Primates include langur, bonnet macaque and slender loris. Notable carnivores are tiger (in larger numbers than in Bandipur National Park), leopard, jungle cat, jackal, wild dog and sloth bear. Herbivores include elephant, spotted deer, sambar and gaur. Over 250 species of birds are present, including the malabar trogon and malabar pied-hornbill and birds of prey such as crested hawk-eagle and crested serpent-eagle.

Then it was time to return.. I having thoroughly enjoyed the greenery, scenery, coffee plantations, the forest and the trees, felt mentally elated.. I was busy guessing the names of the trees on the way back.. I had never before seen a sandalwood tree!

13 thoughts on “Beautiful locales of Coorg”